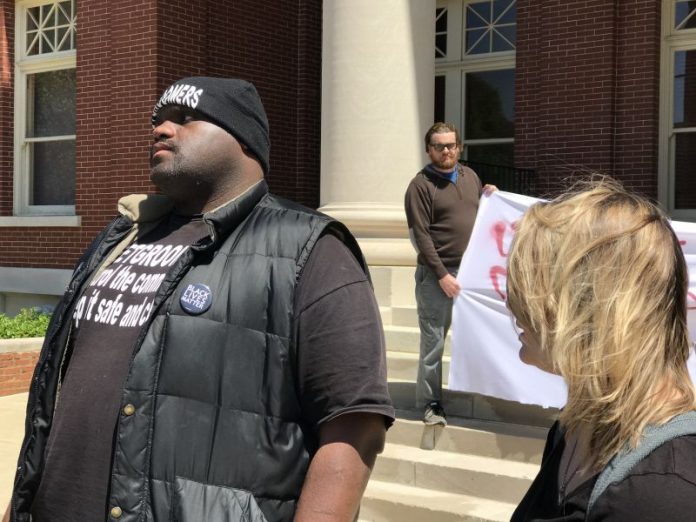 A small group representing NoNaziNewnan spoke to the media in front of the old courthouse in downtown Newnan on Tuesday afternoon. They voiced opposition to the upcoming rally on April 21 to be held by the National Socialist Movement (NSM) at Greenville Street Park.

The upcoming NSM event on Saturday generated comments by all members of the Coweta County Legislative Delegation.

The Tuesday event was billed as a press conference by the Atlanta Antifascists organization, though no Antifa representatives were present.

A flyer provided by the group noted the call for a mass anti-racist response at the NSM neo-Nazi rally. The flyer also noted that NSM “plans to rally alongside their Klan buddies in Newnan.”
“It’s crucial to offer resistance,” said Binion, adding that she was speaking as an individual, and not for any organization. “This type of racism is not welcome here.”

Asked how many Antifa-related people were expected to attend the April 21 rally, Binion said she did not know.

Binion seemed somewhat unclear as to the scheduled presence of the NoNaziNewnan group on April 21.

“Enough is enough. We’re coming to keep the peace,” he said, elaborating on what he said was his past negative experience with officers in Newnan. “Some of the cops here are part of the group. So that’s why (we’re coming to) Newnan.”

The NSM rally will be held at the Greenville Street Park on April 21 from 3-5 p.m.

The city is closing some area streets and a large contingent of law enforcement officers from around the region will be present.

All five members of the Coweta County Legislative Delegation stand in opposition to the upcoming rally in Newnan by the National Socialist Movement.

“Strength comes in unity and I’m proud of this community for standing strong against the evil nature of this rally and what it represents.”
– State Senator Matt Brass (R-28)

“I share the dismay of my fellow Newnanites that we are the city the
National Socialist Movement has chosen for their demonstration. I plan to shun them and unite with our local elected officials, our public safety personnel, our faith based community, and our good citizens to celebrate what makes Newnan such a special place to call home. We are a city anchored by our faith, hope and charity.”
– Rep. Lynn Smith (R-70),

“The racist, xenophobic views of the neo-nazi organization the National Socialist Movement are vile, vulgar, and venomous. I absolutely condemn their racist hate speech and their efforts to broadcast their poisonous ideology from Newnan.”
– Rep. Bob Trammell (D-132)

“It is incredibly sickening to see the National Socialist Movement’s neo-nazi, hate- filled rally come to Coweta County. Coweta is a place that has tremendous diversity and a healthy respect for differences. Racist marches, rallies and speeches do not reflect the values of the citizens in Newnan or Coweta County.”

“The views promoted by the National Socialistic Movement are reprehensible and are in no way keeping with the values of Coweta County. Our community rejects any effort to divide our citizens based on race, creed or color.”