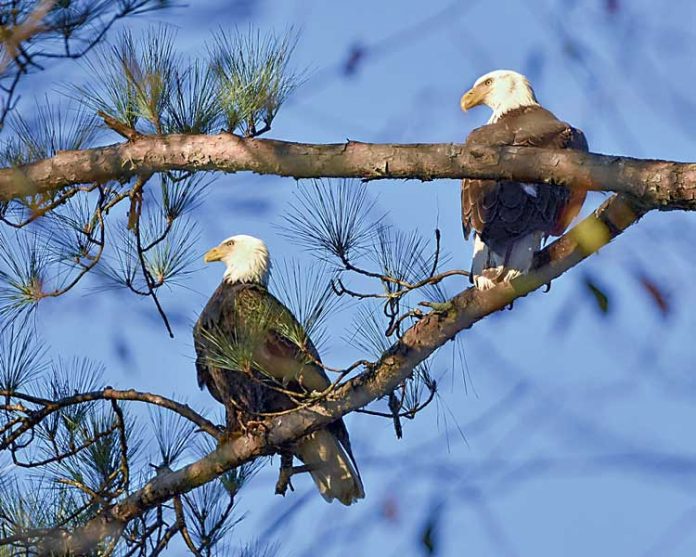 Photographer and Peachtree City resident Dan Nelson has a way of catching the bald eagles flying around the city in dramatic fashion. Also possessing significant knowledge about the feathery family that has taken up residence here, Nelson shared an abundance of information on the eagles and their “home life” on the shores of Lake McIntosh in Coweta County.

The eagles have landed … in Peachtree City. Photo/Dan Nelson.

Nelson photographs the birds and has a massed a wealth of knowledge about them. He said bald eagles have been occasionally spotted in Peachtree City during the current decade. These days, things have changed. Turns out that two adults and two, or perhaps three, juveniles have taken up residence in the area.

“A bald eagle nest has been located on private property on the Coweta County side of Lake McIntosh,” Nelson explained.

This year, and with the eagles again in the area, Nelson said he expected that the eagles are back to lay eggs.

“Once the eggs are laid, there will only be one flying,” Nelson said, explaining that male and female eagles take turns sitting on the nest. “In all probability, there will be one or two eggs.”

Eggs take approximately six weeks to hatch, Nelson said, adding that the young will stay in the nest for about three months.

The eagles have been seen on Lake Peachtree a short distance, as the eagle flies, from the west side of Lake McIntosh.

“They are coming to Lake Peachtree to fish on the south side of the lake that has the most water. And they have favorite trees,” said Nelson. “They go back and forth (between the two lakes).”

Bald eagles visiting the area customarily follow the duck migration and, in the past, would leave when the ducks leave, said Nelson.

“This pair took up residence after Lake McIntosh was filled,” he said, citing the difference between past activity and today’s new residents.

Nelson has travelled to Berry College, in Rome, and to Alaska to see bald eagles.

Nelson said, “I first saw bald eagles here eight years ago. It was during one of their mating rituals. They were flying and would grasp each other’s talons and tumble through the air.Then they would let go, fly back up and do it again.”

The bald eagle came off the endangered species list in 2007, though it is still protected by law, said Nelson. All photos by Dan Nelson. 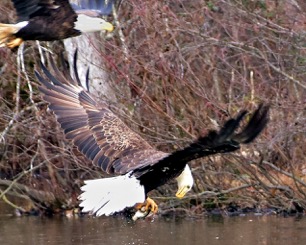 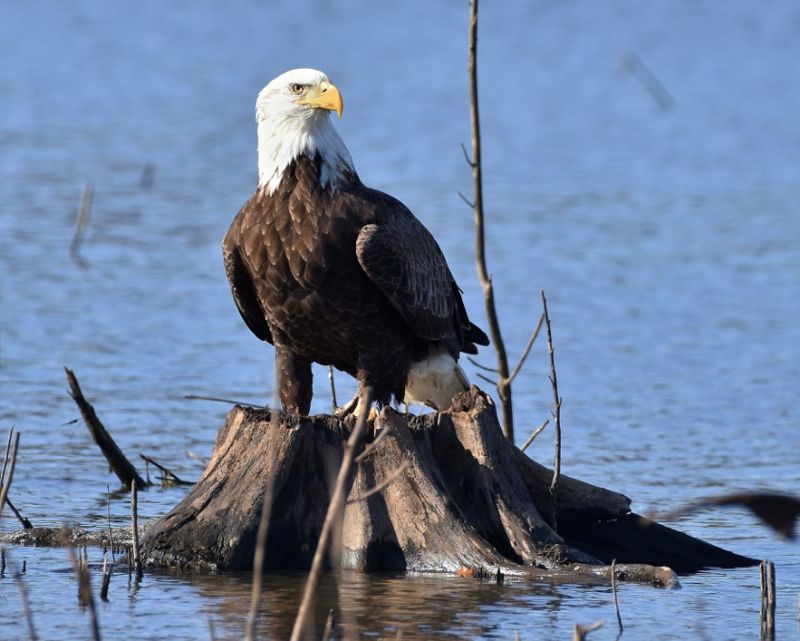