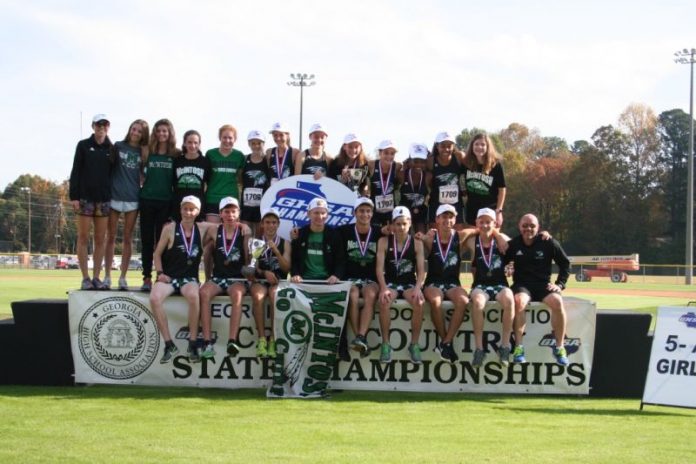 The cross-country season could not have ended any better for McIntosh High School, with the boys and girls squads capturing a pair of AAAAA state championships in last weekend’s state meet in Carrollton.

Starr’s Mill was right on the Chiefs’ heels with second place for the boys and third for the girls. Whitewater’s boys placed seventh and girls came in sixth, while Fayette County was 25th and 26th.

Landmark’s girls won their fourth consecutive state championship in the A Private classification. Individually, Mary Kellison Thorne (19:33) was first to cross the finish line, and her teammates were not far behind — Erin Fegans (20:08) was fifth, Sarah Foreman (20:10) was sixth and Lindsey Biggar (20:58) was seventh.

For the boys, Landmark finished the weekend as the state runner-up after two straight championships. Top individual finishers included Zackary Truitt (17:09) in third, Kameron Jackson (17:42) in eighth and Jack Drury (17:49) in tenth place.

Landmark has won the boys’ state championship 10 times since 1995 and the girls have captured 11 state crowns since 2003.

The AAAAAAA races saw Kyle Harkabus of East Coweta finish third overall (16:20) and his team capturing 17th place on the boys’ side. The girls came in 11th as a team without a runner in the top 50.

Northgate’s boys were 13th and girls were 15th in AAAAAA. The Sandy Creek boys finished in 24th place in AAAA.