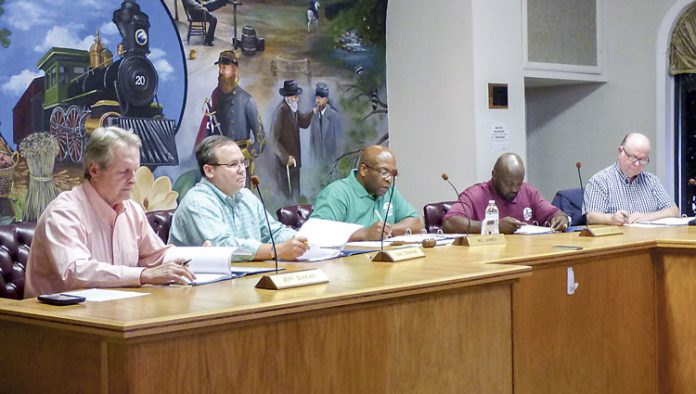 The film industry has transformed Fayetteville in the past four years. Now Tyrone is getting ready to join in the growth with a proposal by newly-created Founders Studios to add up to six television and film soundstages on Ga. Highway 74 North.

Founders Studios representative David Harbin at the June 22 meeting of the Tyrone Planning Commission said the studio has approximately 90 acres under contract. The property is situated on the east side of Hwy. 74 between Jenkins Road and Sandy Creek Road.

Harbin, son of state Senator Marty Harbin, is a Tyrone resident and one of the partners. He said he is joined in the venture by Nathan Dockery, owner of Dockery Group, who grew up in Tyrone and was in Sandy Creek High School’s first graduating class.

Harbin said Phase I would include four soundstages totalling 100,000 square feet designed to cater to the needs of the television production industry. In total, the development could bring up to six soundstages to the property.

The proposal asks that the property be rezoned from O-I (office-institutional) to PCD (planned community development).

“It is the company’s belief that this project will have less of an impact on the environment than the potential uses already approved under the existing zoning,” Harbin said.

He noted at the commission meeting that uses for the property such as office space would generate a heavier traffic flow than would occur from the television and film industry. The project utilizes an innovative and unique work flow-inspired studio concept that allows production companies to save money, save time and create without limitations, Harbin said.

“This revolutionary studio concept was designed by industry professionals for industry professionals,” according to a company press release. “This work flow-inspired design is intended to house an entire physical television production inside its stage space, production offices, construction/flex spaces and work space. The Founders Studios team … has eliminated the challenges and limitations and created an innovative facility.”

Harbin said buildings will be visually separated from the roadway using the natural grades on the site and by the installation of berms and landscaping along Hwy. 74. The proposal includes using the existing curb cut on Hwy. 74 North and a truck entrance along Jenkins Road. A traffic study is part of the requirement for the project.

The company’s goal is to establish relationships with local institutions to increase secondary educational opportunities in Tyrone, Harbin said.

“We’re pleased that the film industry has identified Tyrone as a great place to do business. We recognize that this economic development needs to be deliberate and needs to be responsibly done,” Mayor Eric Dial said.

Architect Bill Foley will design the studio project. Foley was instrumental in the design of the nearby Pinewood Atlanta Studios.

“I was raised in Tyrone and I’m thrilled to bring an exciting development to Tyrone,” Harbin said. “Over the years, I have seen the positive impact the film industry has had upon our city and county. This project will only further that positive growth. As a local business owner, a Tyrone resident and a father, I am completely invested in the future of Tyrone. Founders Studios will continue to establish Tyrone’s long legacy as a beautiful and successful city.”

Planning commissioners at the June 23 meeting unanimously agreed to receive development plans for the studio proposal.

Commissioners also voted unanimously to amend text conditions to zoning ordinances that would permit soundstages and height requirements for those structures.

The proposal is expected to go before the Town Council on July 6.