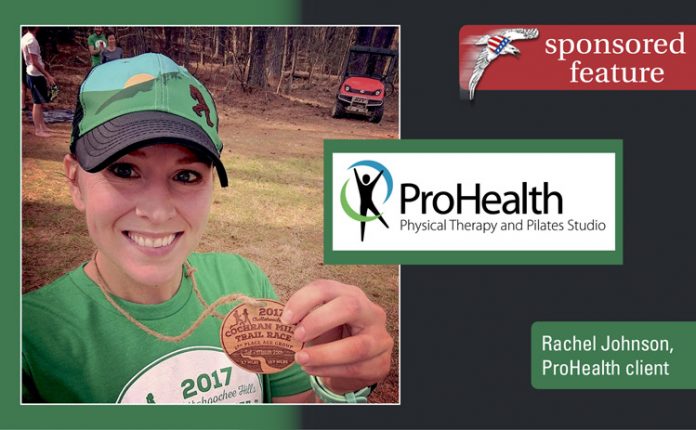 Whether an experienced runner looking to increase speed, efficiency and form, a casual runner put off by occasional discomfort or pain, or a new runner wanting to get off on the right foot, you can find what you’re looking for in the Runity Program, offered exclusively in Georgia by ProHealth Physical Therapy in Peachtree City.

“The program was designed with pain free running in mind and is adaptable to personal needs,” says Christine Sellers, Certified Runity Coach at ProHealth. “Runity teaches you to use your body fluidly so that all your muscles in your body work together, making your form more efficient and allowing you to run pain free.”

Running, Sellers says, is part of our genetic makeup as humans and what’s helped us survive for millions of years.

“What kept us alive and helped us to rise to the top of the evolutionary food chain was our ability to run,” she explains. “We are the only animals who sweat. Large game would have to stop when they got hot. Humans could keep going. We were born to run.” The sedentary lifestyle of modern humans runs counter to our natural ability to run, Sellers says.

“Look at toddlers; they squat down at a very early age. They run correctly. Their bodies are adapted to that movement,” she says. “We’ve taken away our natural ability to run by sitting in chairs and sitting in cars.”

When a modern human puts on running shoes and hits the pavement for the first time, chances are that they will get hurt, Sellers says, simply because the body isn’t ready for the repetitive impact. Runity corrects inefficient form with a series of exercises and drills.

“I assess running form by watching you run on a treadmill with a program that allows me to slow down what I see, analyze your gait and posture and any rotation occurring in your upper body,” Sellers explains “It gives me the information I need to create a program specifically for you.”

The assessment — which utilizes Pilates principles of alignment, control and fluidity of movement — takes only five or six minutes, and noticeable results can be seen within an hour of Runity coaching, Sellers says.

“You get lasting results in six sessions with the application of the homework assigned,” Sellers says.

Lou Angotti, a seasoned runner for four years, came to Runity looking to improve hip pain on the recommendation of his ProHealth physical therapist. Not only has that pain disappeared, but Lou has also gotten faster and more efficient.

Rachel Johnson qualified for the Boston Marathon but still suffered shin splints. “That’s an uncommon injury for seasoned runners. Usually those happen at the beginning of a running career,” Sellers says. “We think she got shin splints because she changed jobs and became more sedentary. She was fast; she was strong. But she was inefficient, and she was in pain.”

Sellers did an assessment and was able to tweak Rachel’s form so that she increased her cadence and became more efficient.

“One of the drills we do involves a metronome that beats at 180. I suggested that she use the metronome during the 5k that she had coming up. She ended up running her fastest 5K since the injury. And that was within one week.” 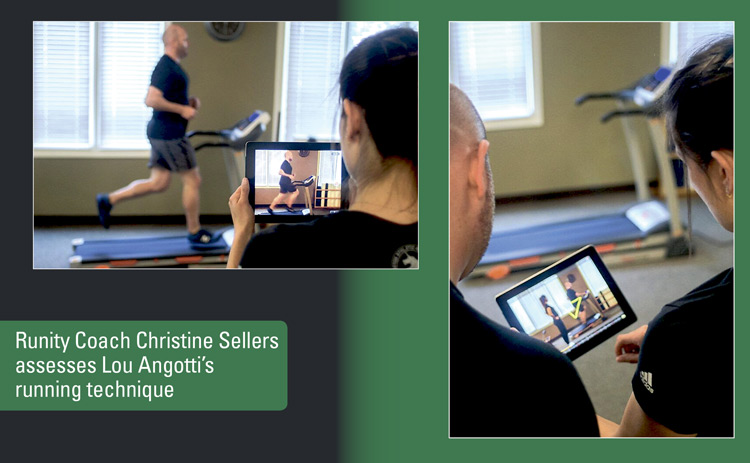