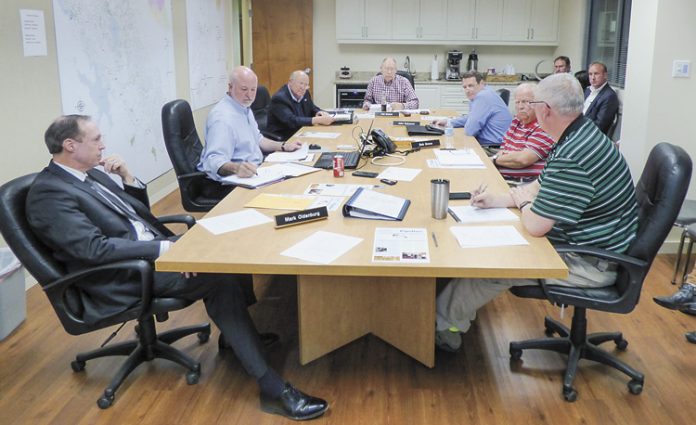 WASA says deal with Senoia, hold on Tyrone; potential conflict with City Council may lie ahead

The Peachtree City Water and Sewerage Authority (WASA) board on March 6 unanimously approved a motion to have WASA General Manager Stephen Hogan and board attorney Mark Oldenburg contact Senoia about providing sewer services and negotiate an agreement that would be returned to the board. The board also discussed, and tabled, the potential for providing sewer services to Tyrone.

In terms of potential sewer services to Tyrone, the board voted to table the discussion, with the understanding that Tyrone can contact WASA to negotiate services.

A potential conflict with the City Council may lie ahead, given the city’s late 1990’s promise to keep sewer service inside the city limits. That promise arose as a condition of the controversial purchase of privately owned Georgia Utilities Co. The developer-owned system had used the sewer service as a valve to control use of land inside the city. Generally speaking, sewer lines allow much higher density residential and commercial development than septic systems.

Board member John Dufresne noted at the outset of the discussion that he had asked for the Tyrone and Senoia items to be discussed.

Dufresne noted that Hogan had previously stated that there existed a 98 percent chance that Tyrone “would not be going with us…. That’s a lost opportunity,” Dufresne said.

Hogan then weighed in, noting that despite percentages, his belief was that Tyrone was favoring obtaining sewer from Fulton County, adding that there is “no definitive agreement today.”

Turning to an issue that has percolated under the surface in the minds of some, Dufresne said WASA, being a duly constituted authority by the state, does not need Peachtree City to operate.

“In the past, WASA agreed not to extend past city limits without the city’s okay,” said Dufresne, adding that Tyrone wants to expand its services by approaching a provider. “We only need city approval if we leave the city limits.”

“The city attorney does not agree,” said Vice-Chairman Phil Mahler said in response. “Tyrone already hooked up to Fulton County. We can explore it if anything changes.”

Dufresne’s comments were presumably linked to the City Council restricting sewer service outside city limits due to having signed off on two WASA bonds in years past. It will be approximately 10 years before those bonds are paid off.

Dufresne continued, saying that he wants the WASA board to “Take a stand. We either exercise our powers or we do what the city wants.”

“It’s the city’s decision, not ours,” Mahler responded.

The motion, approved unanimously, was to table the discussion until Tyrone comes back to negotiate.

“We already told Tyrone to come back if they have a problem,” Mahler said. “We keep bringing this up.”

The discussion turned to sewer services for Senoia.

Dufresne said he believed WASA could “go to Senoia directly. I think we need to take the opportunity to do that. WASA has not approached Senoia.”

Dufresne said he believed Senoia is somewhat shy based on its prior experience in past years when it wanted sewer from WASA but was rebuffed and then went its own way and developed its own sewer system. Senoia today is attempting to get state approval to expand its sewer system.

The discussion ended with the unanimously-adopted motion that Hogan and Oldenburg contact Senoia and attempt to negotiate an agreement for wastewater treatment services and bring the results back to the WASA board.