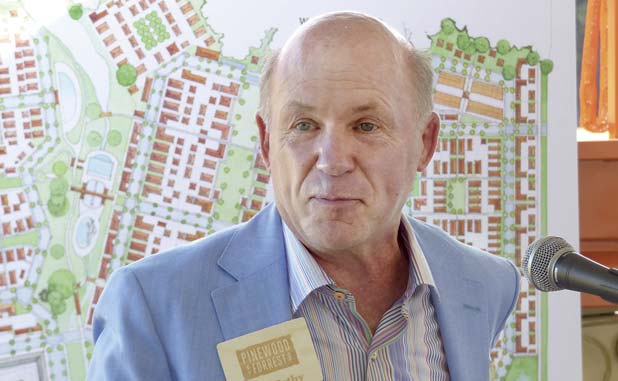 The wait for what Chick-fil-A CEO and Pinewood Forrest owner/developer Dan Cathy called a live, create and play community that will attract attention from around the world is over and about to become a reality.

Plans for the 234-acre master-planned residential and mixed-use development known as Pinewood Forrest across from Pinewood Atlanta Studios in west Fayetteville were unveiled July 21.

“Similar to live, work, play, this will be live, create, play. The ultimate sandbox for creative artists, a place for storytellers who will craft their skills here,” said Cathy, noting that the new concept wil break ground in many directions and will attract attention from around the world.

Cathy and others speaking during the presentation were also quick to note that Pinewood Forrest will be home to and affordable for teachers and firefighters, Millennials and empty-nesters and families as well as those working in the movie industry.

Lynch said that Pinewood Atlanta Studios located across the street has up to 2,000 people per day working on movie and other projects.

Described as a multi-generational community, Pinewood Forrest will include 1,300 unique and varied residences which include single-family homes, Tiny Homes, multi-family flats and townhomes and tower houses and tree homes with elevators, and all designed with low-carbon and Earthcraft/LEED (Leadership in Energy and Environmental Design) features.

The development along Veterans Parkway will also include a boutique hotel and an all-suite hotel with a combined total of 300 rooms, 275,000 sq. ft. of commercial office, street-level retail and restaurants, 15 miles of trails and pathways, more than 118 acres of public green space, an integrated wellness center, community gardens, pools, playgrounds and a dog park.

Lynch described Pinewood Forrest as a “destination unlike anything you’ve seen.”

Oliver gave an overview of the Craft, Garden, Culinary, Woodlands and Village Square districts that will populate Pinewood Forrest.

Also speaking at the event, Mayor Johnson said noted the city’s excitement with the large project.

“We’re all excited. This is a wonderful time for Fayette County and especially for Fayetteville,” Johnson said.