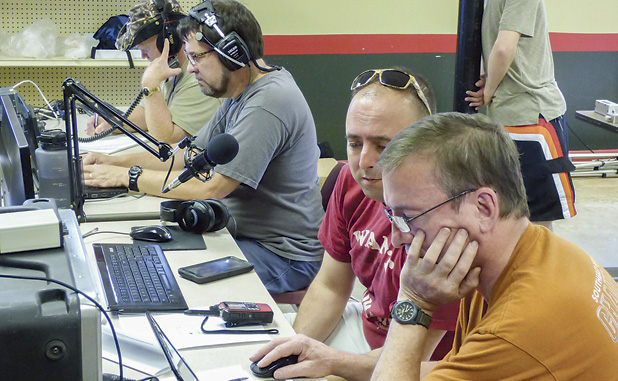 Members of the Fayette County Amateur Radio Club on June 25-26 participated in the national Amateur Radio Field Day exercise.
The exercise was held at the scout hut June 25-26 behind the Fayetteville First United Methodist Church office on East Lanier Avenue and had club members from Fayette and Coweta counties participating in the event that ran for 24 hours.
For more than 100 years, amateur radio, sometimes called ham radio, has allowed people from all walks of life to experiment with electronics and communications techniques and to provide free public service to their communities in times of disasters, according to the National Association for Amateur Radio (ARRL).
Since 1933, ham radio operators across North America have established temporary ham radio stations in public locations during Field Day to showcase the science and skill of amateur radio. Last year more than 35,000 hams participated nationwide, AARL said.
“Despite the internet, cell phones, email and modern communications, every year whole regions find themselves in the dark. Tornadoes, fires, storms, ice and even the occasional cutting of fiber optic cables leave people without the means to communicate. In these cases, the one consistent service that has never failed is amateur radio,” AARL said.
“These operators, often called hams, provide backup communications for everything from the American Red Cross to FEMA (Federal Emergency Management Administration) and even the International Space Station. Local hams also provide backup communications for local events such as walks, runs, cycling and even hot air balloon events. They are also involved with the Fayette County Emergency Management Center, the 911 Call Center, the Amateur Radio Research League and the National Weather Service.”
AARL said hams can literally throw a wire in a tree for an antenna, connect it to a battery-powered transmitter and communicate half-way around the world. This is done by using the layers of the earth’s atmosphere to “bounce” or reflect radio waves thousands of miles. In today’s do-it-yourself environment one of the best ways for people to learn about electronics, physics, meteorology, and numerous scientific disciplines is becoming a ham operator.
Getting a ham license from the Federal Communications Commission requires taking tests about electronic theory and practice from entry level novice license to more advanced levels.
For more information on ham radio, visit http://www.arrl.org/field-day.