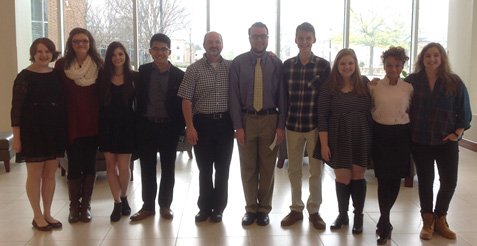 For the first time in Georgia, Level I of the German Language Certificate, otherwise known as Deutsches Sprachdiplom or “DSD,” was offered to students statewide in March, and German language students from Whitewater High were part of the historic event.

These students then took the written part about a week later that that tested their writing and reading comprehension skills. The written section is graded by the Central Agency for the Schools Abroad (Zentralstelle für dos Auslandsschulwesen, or “ZFA”) in Cologne, Germany to ensure consistent grading standards and reliability. It will take several weeks before the students know if they passed, and will be awarded a diploma.

Successful completion of Level I of the DSD is considered proof of knowledge of the German language necessary to be accepted to a preparatory course for admission to a German university. DSD exams are free of charge.

Whitewater High German teacher Patrick Wallace says the school had the most students participating in the exam.

“I am very proud of our first-time results,” he said.