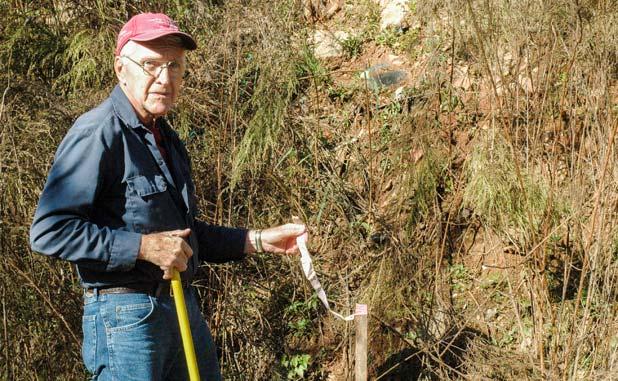 One of the county’s most familiar leaders has agreed to mediate a squabble between Southern Conservation Trust and retired biologist Dennis Chase over the future of the Ridge Nature Area in Fayetteville.

During Thursday night’s Fayetteville City Council meeting, City Councilman Jim Williams said he would get the two sides to the table and create a workable vision for the area.

The Ridge Nature Area on Burch Road is a Fayetteville public greenspace project featuring a 308-acre hardwood forest and wetland habitat located on a ridge line between Whitewater Creek and Gingercake Creek. The initial phase of infrastructure development is now getting ready for completion, and should have an early May opening, Southern Conservation Trust director Pam Young told the Fayetteville City Council in a meeting earlier this year.

The greenspace is nearly half the size of New York City’s Central Park and is sure to draw millennials seeking a bit of nature near the city.

Young said the property was clear cut in the 1820s and was farmed until the 1960s, which allowed old growth trees and vegetation to take over the property.

“Now the goal is to increase biodiversity through restoration projects,” she said.

Southern Conservation Trust is using existing farm drives as routes to enter and exit the park.

After years of desiring to develop the nature area, the city engaged Southern Conservation Trust to develop and manage the public use park. A Master Vision Plan has been created and amenities will be implemented in phases and as community support allows. The Vision calls for some opportunities not currently found in Fayette County.

Once complete, The Ridge will provide a nature education center, and host of sustainable outdoor recreation activities including over five miles of on-site hiking, mountain biking and running trails, geocaching and orienteering, a youth campground, canoe and kayak boat launch, and numerous bird watching spots.

In developing the area, Young said less than 3 percent of the 308 acres will be impacted.

But Chase, in letters to the newspaper, and pleas to the council tells a different story.

“For the last nine years, I have had a continuing wildlife research project, the Ridge Nature Area. Recently, I watched bulldozers destroy part of that wildlife habitat to make way for a public park. I have nothing against public parks, it’s just that this is not the appropriate location,” he wrote.

Chase also take the city to task for letting the development at the Ridge take place.

“The area in question has the interest of the Environmental Protection Agency as a potential Biodiversity Preserve. If this area were to be set aside for the diversity, it could have put Fayetteville and the Trust into the National limelight for recognizing the values of such an area. Biodiversity preserves can be developed so they are available for citizens to enjoy, but not if they are cleared for a ‘park.’

“At one time, I doubted that the city of Fayetteville would support such destruction, but I have been proven wrong. I am told they want a park and the resources out there can just disappear for all they care.” he added.

The area has benefited from a public-private partnership to get the area ready for the spring opening. While the city has contributed just over $12,000 for the project, the trust and community through many in-kind contributions have contributed over $108,000.