The court order from the NAACP voting complaint declares that “… a vote dilution claim must fail “[w]hen the record indisputably proves that partisan affiliation, not race, best explains the divergent voting patterns among minority and white citizens …”

Surprisingly, it continues by stating that “… the County Defendants do not offer any evidence, or even analysis, in support of their contention that racial bloc voting could potentially be related to politics rather than race.” In a bench trial ordered by the appellate court, such evidence could be introduced.

In past primary elections, black voters failed to support very qualified black conservative candidates on three occasions. Contrary to NAACP complaints of race-based voting, those candidates for Fayette County Boards of Education and Commission garnered between 82 percent and 90 percent of their votes from white voters. They stand as glaring examples of partisan political, rather than racial, allegiance.

The Fayette County Elections Office publishes on their webpage the election results going back to 2004. Since then, there have been three general elections where a Democrat and a Republican faced each other for a Commission or Board of Education seat.

If the NAACP’s race-based voting allegations were valid, you’d expect the three election results to very closely mirror the racial mix of voters. They did not, by wide margins.

The Georgia Secretary of State reports that black electors comprised 17 percent and 21 percent of active voters in Fayette County during the 2006 and 2010 elections. Yet, the two black candidates captured 31 percent and 32 percent of votes. How can that be? Where did so many extra votes come from?

White electors who voted for Democrats cast the additional votes. While the actual outcomes varied significantly from the racial composition of voters, they aligned about perfectly with Fayette voters’ political affiliations.

The results were no different when the political opponents were both white. Race was irrelevant. 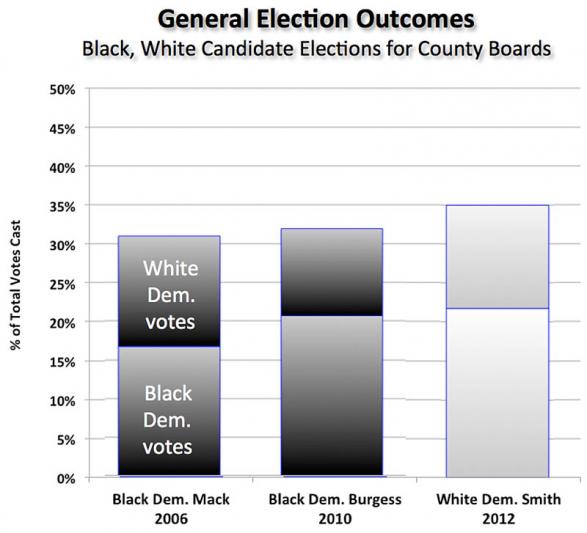 Conservatives well understand the frustration associated with partisan politics. They were regularly incensed during 2008-2010 when liberals controlling the Executive Branch, the Senate, and the House pushed legislation through during the middle of the night. And gave lawmakers only hours to review 2,000-page proposals … after publicly promising days to do so.

I’m confident the Fayette NAACP serves its members well in a number of areas. Several years ago, President John Jones’ NAACP invited me to a monthly meeting to debate a pending statewide tax referendum. I accepted and he managed the event professionally. Two years ago, Jones accepted my invitation to be our monthly speaker at the Fayette County Issues Tea Party meeting. It also was professional.

The NAACP’s choosing Fayette as the poster case for racially motivated countywide voting is way off the mark, however.

I believe a significant majority of Fayette citizens support the right for all of us — of every race, gender, faith, and sexual orientation — to vote on every Board member, and we want to unify the county rather than Balkanize it into self-destructive fiefdoms.

To paraphrase a former president, we call out to the NAACP President to stop building a wall to divide us, but a community that unites us: “Mr. Jones, tear up this lawsuit!”