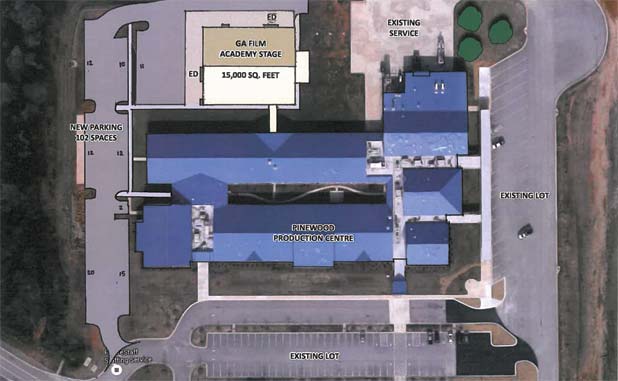 The new Georgia Film Academy in Fayetteville is set to open in January. Following in February will be the completion of a 15,000 sq. ft. soundstage for student use to be located adjacent to the Pinewood Production Centre on Sandy Creek Road.

Approved Nov. 17 by the Fayetteville Planning and Zoning Commission, architect Bill Foley said plans include having the 15,000 sq. ft. soundstage building ready in February. The soundstage will have an elevation of 47 feet, though it will not be visible from Sandy Creek Road and will not be seen from nearby Veterans Parkway, Foley said. Other plans include additional landscaping and the ability to convert the production centre area from septic to city sewer when needed, said Foley.

“The intent is to create a soundstage area for training,” Foley said, adding that the project, situated at the rear of the centre, will also include the installation of a number of additional parking spaces.

Foley said the film academy will lease the soundstage.

Another aspect of the upcoming Ga. Film Academy deals with student housing. While not yet known how many students from across Georgia will attend the academy in January or in future years, Foley said there is the potential for some student housing to be located at the Pinewood Village residential, retail and office development a short distance to the south along Veterans Parkway. Pinewood Village was approved earlier in the year though development at the site has yet to begin.

Georgia Gov. Nathan Deal earlier this year stated his intention to establish the Georgia Film Academy to meet the needs of the state’s growing film industry. The film academy is now a reality in Fayetteville.

The new film academy will open its doors in January and, according to its Executive Director Jeff Stepakoff, the intent is to offer for-credit courses in conjunction with the University System of Georgia (USG) and the Technical College System of Georgia (TCSG) along with continuing education course work.

“There is tremendous support and interest in the film academy,” said Stepakoff, a professor of film and television writing at Kennesaw State University who has been involved in producing, writing and content creation for both television and motion pictures.

Stepakoff said industry partners, such as Pinewood Atlanta, are integral to the film academy’s goals and intent.

“We’re very excited about the potential,” Stepakoff said. “We’re excited about putting Georgians to work on soundstages and on the set.”

With the opening of the film academy in Fayetteville, Pinewood Atlanta Studios will become the first industry partner in a joint venture between the Board of Regents, USG, TCSG and industry partners, Stepakoff said.

“The intent is to have pilot classes with our academic partners (USG and TCSG) in January for the spring semester,” Stepakoff noted. “The intent is to offer courses for credit and those for continuing education.”

Georgia Board of Regents Marketing and Communications Coordinator Sonja Roberts noted that the film academy is still a work in progress. The academy is looking to achieve a number of goals in spring 2016, she said.

“This is a collaborative effort,” Stepakoff said of the arrangment, one that opens the Ga. Film Academy to all Georgians.

USG and TCSG are also working with other industry partners in other areas of the state.

Dear commenters, write your own letters, insults are worthless