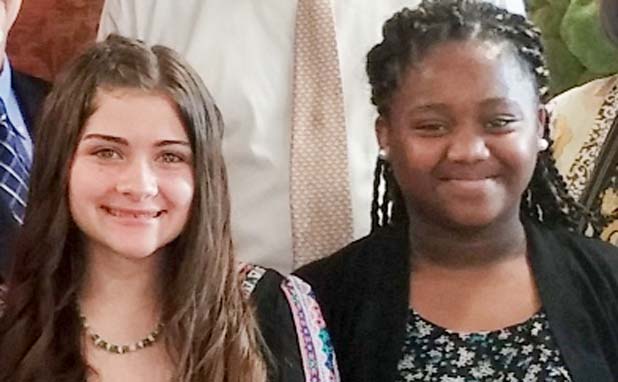 “Today is about two very special students,” said Coweta County Superintendent Steve Barker, welcoming the scholarship recipients and guests at the ceremony. “It is the beginning of a journey that we will all take together to make college a reality for Deserae and Tomaiya.”

Both students signed pledges to meet the requirements of the scholarship through graduation, and were co-signed in the pledge by their parents, mentors and First Lady Deal, said school system spokesman Dean Jackson.

REACH is a needs-based mentoring and scholarship program started in 2012 by Governor Nathan Deal, as a part of his Complete College Georgia initiative. REACH is designed to ensure that academically promising students have the academic, social, and financial support needed to graduate from high school and complete college.

“You’re setting an example for the rest of your school and your fellow students,” said Deal said at the ceremony.

Arnall Middle School principal Jan Franks described Stafford as a hard-working, goal-oriented student who understands the value of education and who has aspirations of owning her own bakery company. She is involved in Arnall’s band, chorus, Beta Club and Heartbeat Club, and she was accompanied Wednesday by parents Timothy and Lesley Stafford and other family members. Her mentor is Dr. Rebecca Gibson, a retired Coweta County educator, school administrator and college administrator, Jackson said.

East Coweta Middle School principal Schwanda Jackson described Herrera as an exceptional student, one who is smart, articulate and respected by her peers and teacher, and who has aspirations of becoming a psychologist. She is involved in East Coweta Middle’s band, academic bowl, Science Olympiad and Student Government Association, and she was accompanied Wednesday by her mother Laura Waller and her grandmother Billie Anne Cosper. Her mentor is Tiffany Busby, an East Coweta Middle School counselor.

Deal said that students who enter REACH need to be committed, engaged and goal-oriented.

“I believe you have that quality. Teachers can tell,” said Deal, a former educator. “I believe you will go to college… and make a difference for yourselves, your families, your community and for Georgia.”

Through REACH (Realizing Educational Achievement Can Happen), eligible eighth-grade students who apply and are chosen are paired with a mentor and an academic coach who work with them through high school. Scholars must have the support of a parent, legal guardian, or other committed adult, and must maintain good behavior, good grades (a 2.5 grade point average in core academic courses) and good attendance, and graduate from high school.