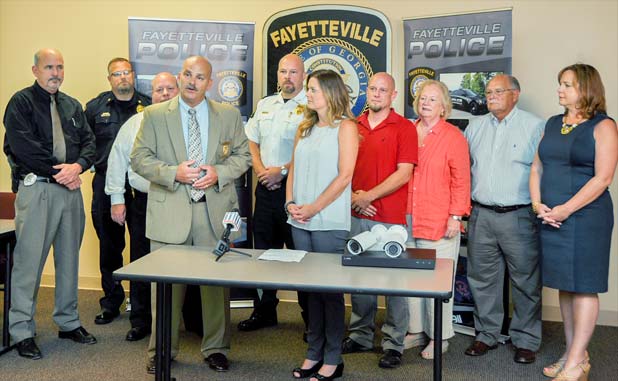 Whitlow said the remote camera system will be temporarily attached to utility poles and will be used in areas showing increases in criminal activity.

“We’re not watching people, we’re watching areas where we are seeing criminal activity occurring,” he said.

PLP Systems Coordinator Katie Connolly said, “I grew up in Fayetteville and I live and work here. My children will grow up here. I want to see this community remain a safe place for my family and my business and we will help the police any way we can”.

Whitlow said PLP owner Paul Moore and his wife, Sharon, along with their daughter Katie Connolly and son Chris Moore had become weary of the negative publicity being directed at law enforcement over the past several months.

“Recently, Phoenix Loss Prevention had suffered a theft at the business and when Fayetteville detectives came to to investigate, the Moores showed them their surveillance cameras. The detectives were in awe of what was available and the department began seeking information regarding the purchase of a camera system,” said Whitlow.

The conversation led to a decision by PLP to donate a camera system to the department.

“Paul Moore and his staff decided to make a difference in the community they live and work in by donating the equipment which will be an important tool for the Fayetteville police to focus on increased crime areas within Fayetteville,” Whitlow said.

The camera system is manufactured by 3X Logic, based in Westminster, Colo.

“When 3X Logic was notified by Phoenix Loss Prevention of their intention to donate the system, they decided to get involved also. 3X Logic Vice President of Sales and Marketing Christie Walters-Hebert travelled to Fayetteville and was on hand for the presentation,” said Whitlow.

Whitlow said PLP will also supply training and assistance in the operation of the camera system to the department.

“We give our profound thanks and appreciation to Phoenix Loss Prevention and 3X Logic for their benevolence,” said Chief Scott Pitts. “This is a perfect example of a community and their law enforcement working together to combat crime and keep Fayetteville a safe place. Our partnership with businesses like Phoenix Loss Prevention and citizens like the Moores are a big part of what makes Fayetteville an enviable community.”