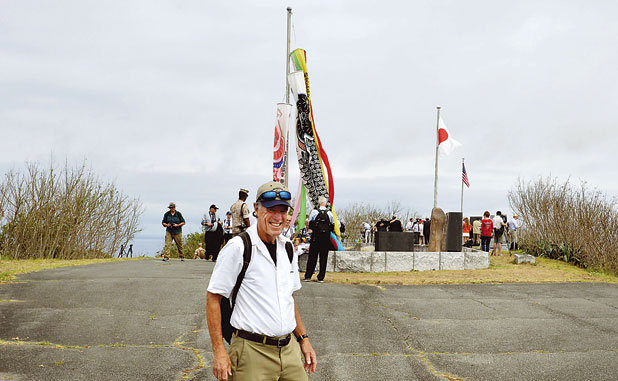 Peachtree City resident Tom Rickert flew missions over Vietnam half a century ago. But it was another mission that recently took him to the Pacific Ocean island of Iwo Jima in March for the 70th anniversary of the Battle of Iwo Jima. It was a mission he will not forget.

For Rickert, a 71-year-old veteran and retired Delta pilot who flew Lockheed C-130s in Vietnam, it was a way to walk in the footsteps of other soldiers and continue to appreciate the reality of what occurred 70 years ago.

“It was a moving and, at times, tearful experience, one I will never forget. I spoke with as many veterans as possible. Their stories are remarkable. On the top of Mt. Suribachi is the quote from Admiral Chester Nimitz, ‘Among the men who fought on Iwo Jima, uncommon valor was a common virtue.’ It is impossible to understand the hell that enveloped this small Pacific island for 36 days in 1945.”

Rickert had the opportunity to go to the 70th anniversary commemoration of the Battle of Iwo Jima on March 21.

“I was with a group of 450 people who arrived in Guam to begin the event,” said Rickert. Among the group were 43 World War II veterans ranging in age from 88 to 95. The only remaining Medal of Honor recipient from the battle, Woody Williams, was with the group along with the only remaining Navajo code talker.

Rickert said wives, children, grandchildren and other relatives of World War II veterans of Iwo Jima made the trip along with many dignitaries, retired and active admirals and generals, the Secretary of the Navy, and Commandant of the Marine Corps.

“Of the Japanese who arrived were the Ambassador to the United States, various ministers, senior officers and, of course, family members of those who fought on the island,”Rickert said. “Also the only Japanese survivor from the Iwo Jima battle was in attendance. In all, 22,000 Japanese lost their lives on Iwo Jima and 200 were captured. And there is now one remaining former Japanese POW. (It was on Iwo Jima that) 6,800 Americans lost their lives.”

Rickert said Lt. Gen. and Iwo Jima veteran Lawrence Snowden, now age 92, has been arranging this “Reunion of Honor” event for the past 20 years.

“He has indicated this will be the last reunion,” Rickert said.

Describing the site, Rickert said Iwo Jima today is a 2-mile by 4-mile volcanic island halfway between Guam and Japan.

“The entire island is a Japanese civil defense base,” said Rickert. “It is open to outsiders one day a year to remember the historic battle that took place here from Feb. 19, 1945 until March 26, 1945.”

Rickert said the group first gathered on March 20 at a hotel in Guam for an Iwo Jima symposium that included lectures, speeches and a banquet. It was on the following day that the group flew to Iwo Jima, with each plane circling the island before landing.

“We had eight hours on the island. Everyone either walked or rode to the top of 580-foot Mt. Suribachi where the famous American flag was finally raised. We also walked the black sand invasion beach and explored a couple of the hundreds of interconnecting Japanese caves,” Rickert explained. “Later, the 70th anniversary ceremony was held on the island. Speeches were given, bands played, wreaths were laid and the bond of friendship between the two nations was most visible.”

Rickert throughout trip he listened to the words of the few Iwo Jima vets who remain.

“These are very humble people. Some of them don’t like to talk about it,” Rickert said of some who made the return journey to the island and recounted their experiences there so many years ago. “Some of the vets had tears in their eyes. And seeing all the caves and what they had to go through … they fought the Japanese on the island and ‘in’ the island. Some of these guys were only 18 at the time. And in a few years they’ll all be gone. I wonder if the young people today will even remember?”

According to the National World War II Museum, “U.S. Marines invaded Iwo Jima on Feb. 19, 1945, after months of naval and air bombardment. The Japanese defenders of the island were dug into bunkers deep within the volcanic rocks. Approximately 70,000 U.S. Marines and 18,000 Japanese soldiers took part in the battle. In thirty-six days of fighting on the island, nearly 7,000 U.S. Marines were killed. Another 20,000 were wounded. Marines captured 216 Japanese soldiers; the rest were killed in action. The island was finally declared secured on March 16, 1945. It had been one of the bloodiest battles in Marine Corps history.

“After the battle, Iwo Jima served as an emergency landing site for more than 2,200 B-29 bombers, saving the lives of 24,000 U.S. airmen. Securing Iwo Jima prepared the way for the last and largest battle in the Pacific: the invasion of Okinawa.

“The photograph was quickly wired around the world and reproduced in newspapers across the United States. The image was used as a model for the Marine Memorial at Arlington National Cemetery.”