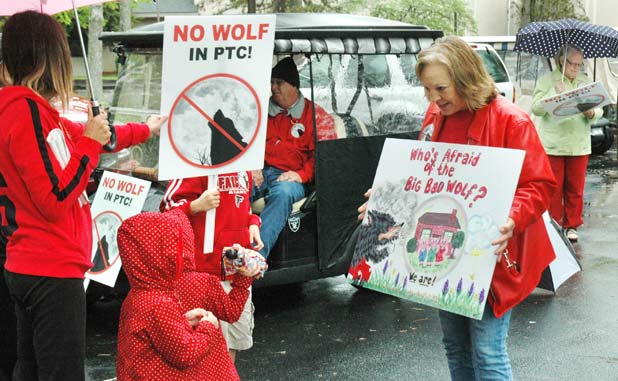 The City Council turned Great Wolf Lodges water park away from Peachtree City’s door April 16 with a unanimous vote to deny the indoor family water park rezoning and variance requests. However, there is a technicality that could bring the Wolf back, provided someone on the council wants to go down that path.

Peachtree City has a requirement that a denied rezoning project have a six-month waiting period before it can be proposed again. That assumes that a company would want to go that route, and there has been no indication today that Great Wolf would want to wait it out and take their chances again.

Asked if there is another option for a rejected proposal, City Manager Jim Pennington said a council member on the prevailing side of the previous vote could bring the issue to the council for a vote to reconsider the proposal.

If willing to be considered by a majority of the council, the proposal process could begin anew, Pennington said, adding that there is no indication that such a move is in the works.

The Great Wolf proposal to establish a family-oriented indoor water park resort on 38 acres to replace the Dolce-Atlanta conference center on Aberdeen Parkway was defeated by a unanimous vote of the council before a packed house of opponents on April 16.

With Great Wolf out of the picture, it remains to be seen what happens with the Dolce Atlanta-Peachtree Hotel and Resort that currently leases the facility.

Dolce is reported to have approximately 100 employees remaining and, according to Councilman Mike King on April 16, is losing $50,000-100,000 per month.

Wyndham Hotel Group, a subsidiary of Wyndham Worldwide, announced Feb. 2 it had acquired the Dolce Hotels and Resorts brand and its portfolio of properties in the United States and Europe for $57 million in cash, according to a company press release.

Wyndham Hotel Group is owner of the Wyndham facility in Peachtree City.

Wyndham Hotel Group Public Relations Director Kathryn Zambito could not be reached for comment on what course Wyndham might take in the coming months in terms of Dolce’s future in Peachtree City.

Below, Councilman Eric Imker (R, seated) urges a vote on the Great Wolf Lodges proposal after more than three hours of a public hearing April 16 at City Hall. Council members (L-R) Mike King, Mayor Vanessa Fleisch, Terry Ernst and Kim Learnard took only minutes to vote against the requested variance and rezoning. Part of the overflow crowd of more than 200 is seen behind Imker. Photo/Ben Nelms. 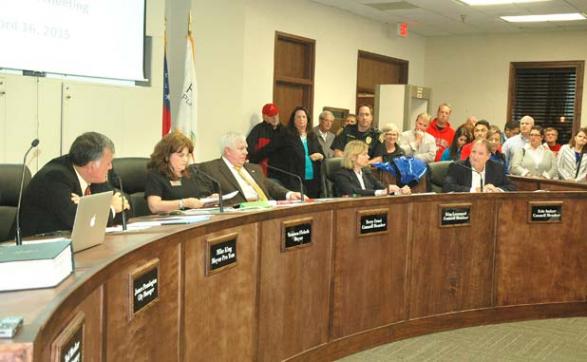