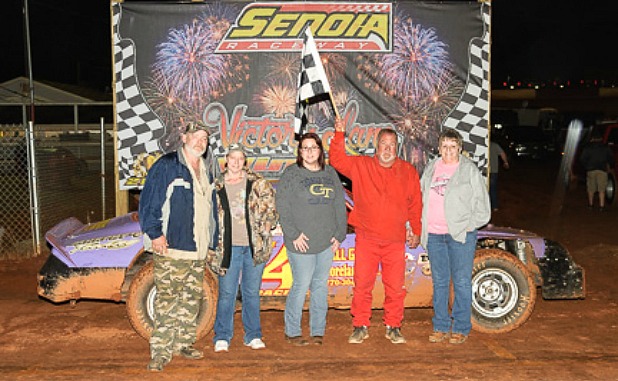 The Senoia Raceway returned to action Saturday, but hometown driver Winford Minix was the night’s only victor before racing was rained out.

Minix inherited the lead on lap 17 after the third different leader in the Bomber feature retired due to mechanical issues.  Minix was the leader when the race was halted due to the rain that moved over the raceway.

Griffin’s Alex Rudolph opened the race stealing the lead away from his outside pole position.  His lead only lasted two corners as Newnan’s Kevin Evans overtook him on the second circuit and built a good lead until lap eight when the caution flag came out for an accident on the front stretch.

Douglasville’s Kip Stanfill locked horns with George Purgason of Hogasnville.  The tangled race cars slammed into the interior concrete wall with Purgason’s ride pirouetting and coming to rest on top of the new dirt berm lining the inside of the turns.  The impact knocked down part of the facilities inside concrete retaining wall.

On the restart, LaGrange’s Buck Ussery began a charge to the front of the field.  His quest was completed on lap thirteen when then leader Kevin Evans car stalled and rolled to a stop causing the races next caution.

Ussery would then fall victim to the unwanted lead position only four laps later when his car developed engine issues and he had to drop from the race.  That was when the patient Minix inherited the number one position on the leaderboard.  It was at this point that the rain began to fall handing the victory to Minix.

The racing action was intense throughout the preliminary races prior to the rain.  LaGrange’s 13-year-old Bryson Ussery flexed his muscle and showed his nerve during the B Cadet heat race.  Ussery was trailing leader Parrish Duncan of Newnan on the final lap when Duncan slowed for lapped traffic.  The teenager went up to the high side of the track and squeezed his #97 racer between the lapped cars and grandstand wall beating Duncan across the finish line by just over a foot.

All preliminary results were washed out with the resulting rains.  Drivers will have to redraw and requalify for the starting positions March 28.

Spectators, drivers and crew members who were in attendance, should redeem their tickets and wristbands from the March 21 event for admission into the Saturday, March 28 race night.

The March 28 event will feature the track’s first Bonus Race of the season as the Limited Late Model division will see the spotlight running an extended lap race paying $1,200 to the race winner.  The Super Late Models, Crate Late Models, B Cadets, Hobby Stocks, Mini Stocks and Bomber divisions will also be racing.  The Modified Mini will see their first racing opportunity of the season on Saturday night while the Legends Cars will be off the schedule for one week.

For additional information, schedules, rules and more, visit the Senoia Raceway website at www.senoiaraceway.com or call 770-599-6161.