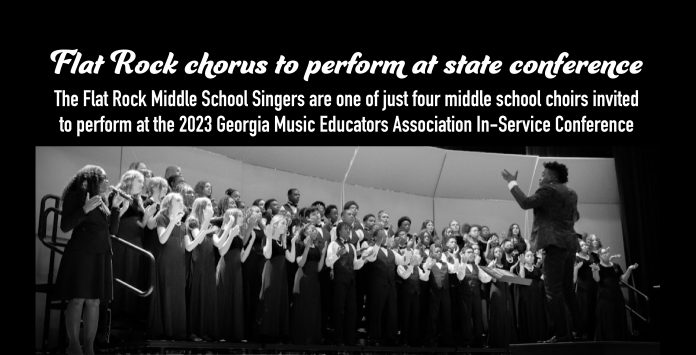 The Flat Rock Singers are 7th and 8th grade chorus students under the direction of Ladell Fortune. They are one of just four middle school choirs selected to perform at the GMEA In-Service Conference, and this is the first time they have received an invitation to perform at the state level.

The GMEA is the professional music organization for music educators in Georgia. Each year in preparation for the In-Service Conference, the finest musical ensembles in the state are invited to apply to be selected as a featured performing ensemble. In order to be considered, the applying ensemble must have an impressive comprehensive record of musical success within their program. Groups that are selected to perform are presented to the distinguished audience of musical educators as some of the finest performing ensembles in Georgia. The performing ensembles perform a 30-minute concert showcasing their amazing talent by presenting a diverse and challenging repertoire of music.

The Flat Rock Middle School Singers presented a GMEA Preview Concert on January 20 in Sandy Creek High’s Patriot Auditorium. During the concert, the Flat Rock Singers received two proclamations, one from the Fayette County Board of Commissioners and the other from the State of Georgia. The proclamations were presented by County Commissioner Charles Rousseau and Senator Valencia Seay.

They will present their GMEA Concert Performance on Thursday, January 26, 2023 at First Baptist Church in Athens, GA.