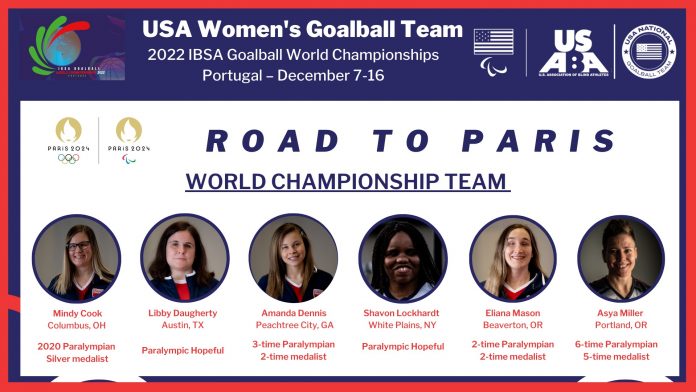 With a combined 23 Paralympic Games appearances and 15 Paralympic medals to their credit, an experienced roster of 12 athletes has been selected to represent the U.S. at the 2022 IBSA Goalball World Championships in Matosinhos, Portugal, Dec. 7-16. This year’s tournament provides the first chance for countries to qualify for the Paris 2024 Paralympic Games, with the top two teams in the men’s and women’s competitions punching their ticket to Paris.

“We are proud to be sending such a talented roster to next month’s world championships as we attempt to secure berths in the Paris 2024 Paralympic Games,” said U.S. Association of Blind Athletes CEO Molly Quinn. “The U.S. teams are fully prepared to take on the world’s best thanks to the dedicated staff and wonderful facilities at the U.S. Olympic & Paralympic Training Site at Turnstone Center in Fort Wayne, Indiana.”

The U.S. is looking to rebound from its performance at the last world championships held in Malmo, Sweden, in 2018 when they were shut out of the medals for the first time since 1994. In a tune-up event in October at the Nations Cup in Germany, the U.S. women’s team captured the silver medal and the men’s team took home the bronze. Eight of the 12 athletes selected for the December world championship rosters were members of the Tokyo 2020 U.S. Paralympic Team.

The women’s squad welcomes back four members of the silver-medal winning team in Tokyo, including six-time Paralympian and 5-time Paralympic medalist Asya Miller (Portland, Ore.). Miller will be joined by Tokyo teammates Amanda Dennis (Peachtree City, Ga.), Eliana Mason (Beaverton, Ore.) and Mindy Cook (Columbus, Ohio). Dennis has competed at the last three Paralympic Games, winning bronze in Rio (2016) and silver in Tokyo (2020). Mason won medals alongside Miller and Dennis in both Rio and Tokyo, while Cook made her Paralympic debut with a silver medal in Tokyo. Joining them on the court will be 2019 Parapan American Games silver medalist Shavon Lockhardt (White Plains, N.Y.) and 2022 Americas Championships bronze medalist Libby Daugherty (Austin, Texas).

“The goal of the USA Women’s National Goalball Team is always to be the best in the world,” head coach Jake Czechowski said. “World championships allow us to go out and prove that we deserve that top spot. With such a huge event, we will be challenged both on and off the court which we love because the biggest challenges typically bring out the best in our team. We are ready to take on the world and show everyone what this team can do.”

The U.S. Men’s Goalball Team has won three world championship medals, second only to Lithuania’s four and tied with Germany and Slovenia. It has been 40 years since the last gold medal for the American men’s team, but they reached the medal stand in 2006 and 2014, winning bronze at both of those events.

“Coming off the recent Nations Cup competition in Berlin, I feel confident that the USA Men’s National Goalball Team has an excellent chance to medal at the world championships and qualify for the Paris 2024 Paralympic Games,” said USA Men’s Goalball Head Coach Keith Young. “This tournament is a long marathon finishing up with a series of hard sprints. Our team has the players that fit like a puzzle, with great leadership and very strong role players who can contribute to victories.”

A total of 16 women’s teams and 16 men’s teams will vie for the coveted top two spots that give automatic qualification into the Paris 2024 Paralympics. Competition for the U.S. teams begins Thursday, Dec. 8 with seven consecutive days of round-robin competition against each of the seven teams in their group. The quarterfinals and semifinals will be played on Thursday, Dec. 15 with medal matches to follow on Friday, Dec. 16.

About U.S. Association of Blind Athletes
The mission of USABA is to empower Americans who are blind or visually impaired to experience life-changing opportunities in sports, recreation, and physical activities, thereby educating and inspiring the nation. A member organization of both the United States Olympic & Paralympic Committee (USOPC) and U.S. Soccer, USABA is certified by the USOPC as the national governing body for the Paralympic team sports of goalball and blind soccer. Since its founding in 1976, USABA has reached more than 100,000 individuals through its multi-sport programming. The organization has emerged as more than just a world-class trainer of blind athletes, it has become a champion of the abilities of Americans who are legally blind. In 2022, USABA expanded its offerings of endurance sports events with the launch of its Team Tethered Together program for visually impaired runners and their guides. Learn more at www.usaba.org.