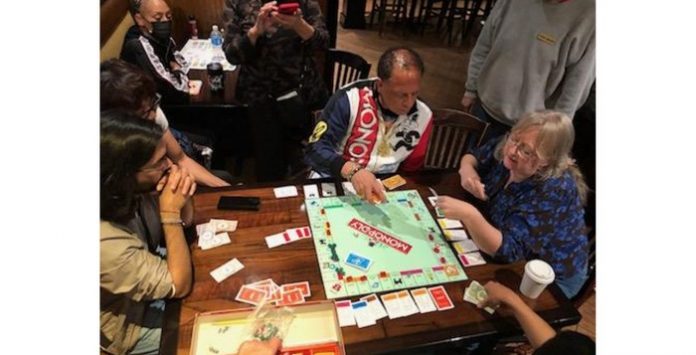 Players from around the country competed in what has become the largest annual Monopoly tournament in the country.  This year, 141 contestants registered to play in the 128-seat tournament.  Players came from 12 states and numerous cities across Georgia.

The Peachtree City tournament is unique as there has never been an entry fee.  Peachtree City businesses have generously supported the tournament over the years.  This year, over $2,100 in cash and prizes were awarded.

Michele Yother of Peachtree City won the tournament trophy and the first place $100 cash prize.  Michele won her way to the final table by winning in the preliminary round of 128 players on 32 tables.  Next, she went to the quarter finals winning against 64 players on 16 tables and then winning in the semi-finals with 16 players on 4 tables.

Winning at each step of the tournament does not come by luck.  If anyone thought playing Monopoly was just a game of chance, that notion has been ousted with Michele winning 4 separate rounds to get to the final table and then winning at the final table against well-established players who compete in numerous tournaments around the country.  Clearly, skill and cunning are involved.

All four players at the final table are to be commended for their excellent play.  Richy Quebral from San Francisco came in second winning $50 cash.  Cecil Lampkins from Kansas City came in third winning $25.  Osman Faruqi from Tyrone, GA came in fourth also winning $25.  Each of the 16 players who won in the quarter finals also earned $10.

The final table game was one of the most interesting games of the entire tournament.  Every property had been bought, but no player had a monopoly.  Complicating the matter, no two players could together produce more than one monopoly, and no three players could produce more than two monopolies. For nearly an hour, there was essentially a stalemate with no one willing to trade.

In a strategic move, Richy Quebral, who owned a property needed by each of the other players, initiated a 4-way trade, negotiating first choice of the monopolies created.  The trade resulted in an immediate flurry of building by the cash-flush players.  Before the next roll, all the houses had been bought and hotels were popping up around the board.

With players lined up to approach his monopoly, Richy hoped his choice would pay off.  It did at first, with rents coming in from every player, but right around the corner, Michele Yother collected big as players hit her monopoly too.

The last 10 minutes saw the board continuously changing as houses were sold back to pay rents and strategically rebuilt based on where opponents were likely to land with their next roll of the dice. Michele was able to take both Cecil Lampkins and Osman Faruqi out of the game, collecting their remaining cash and properties.

In an intense finish, Michele came out on top with the most assets, winning her first tournament.  Side note:  Michele played in the very first Peachtree City Monopoly Tournament back in 2009!

The generosity of local Peachtree City businesses made this tournament successful.  Prizes were randomly raffled away during the tournament at no charge.

Everyone had a great time with the emphasis being on just having a fun time, catching up with friends who came from out of town and meeting new friends.  This article and more pictures can be found on Facebook by searching “Peachtree Monopoly”.