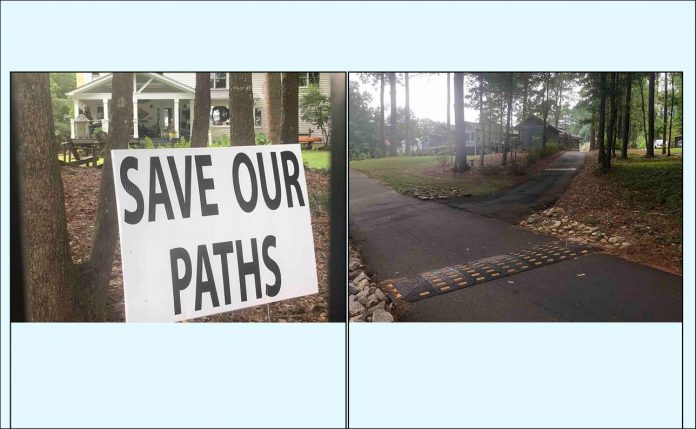 And all the nuances in-between — crown jewel of Georgia’s first, best planned city and a continuing nuisance of boombox-loud music and dangerously speeding teens and geezers. Or in Forrest Gump’s memorable ending: “I think maybe it’s both — maybe it’s both happening at the same time.”

So let’s say you buy this nice house with a sweet view of Lake Peachtree next to a paved golf cart path. Pretty soon you discover that the path brings some unwanted stuff close to your nice house. So you complain to the police chief and the city manager and you get tired of that so-called multi-purpose path and its annoyances, especially since everybody you’ve complained to just shrug their shoulders and don’t fix your problem.

Suppose one of the homeowners has just been elected to the City Council. Here’s where things begin to run off the trails … uh, rails.

You come up with the notion that what us old-timers still call the bike trail is no more than a city easement on your property, not really public property at all. You petition the city council to abandon that public easement so the offending cart path can just be closed off to the noxious public. Voilà, problem would be solved. Meanwhile, signs go up in your neighborhood: “Save our paths.”

And further suppose that the homeowner and new City Council member contacts the soon-to-be-retired city manager to lobby for an unusual addition to the cart path — a speed bump. And not just one but several, as well as instructions to the city about where those speed bumps should be placed in relation to the homeowners’ property. And, so it gets done — the most speed bumps per hundred yards in Peachtree City. And all at city taxpayers’ expense.

And to put fudge on the sundae, the City Council holds a closed-to-the-public executive session July 12 to talk about “property acquisition” — that section of cart path easement that the lakefront homeowners seek to close to the public.

Well, gosh. Now you have a looming legal mess that apparently nobody from the mayor on down foresaw.

Here’s the latest problem spelled out: The Georgia Open Meetings law allows the council to close the meeting to talk about “property acquisition.” But the property owner was an elected official involved in that closed meeting. The meeting resulted in the council expressing “no interest” in the deal. But I contend the damage to the public’s right to know had already occurred.

At a minimum, the homeowner/council member should have recused herself physically from all discussion of the cart path issue, up to and including her physical presence at that closed meeting.

Council member Gretchen Caola, who lives at the property under discussion, was physically present during a closed meeting at which property acquisition was discussed and — in effect — decided upon, even if the council majority was “not interested.”

In this matter, the council seems to have lost its perspectives on the law and the city ethics code.

This was not some random piece of property — it belonged to one of the five council members, who sat in on the closed-to-the-public meeting to decide on the fate of the homeowners’ property.

Why did not somebody raise a big red flag and say, “Wait a minute! We can’t do this! This is wrong!”

Maybe the public should call a meeting and invite the city council members to it. The meeting agenda would have one topic: “Get your heads out of your dark places and follow the law and observe common sense ethics.”

OK, so the council in its collective, no-public meeting practice decided and announced almost as an after-thought by the mayor: “There will be no more cart path speed bumps installed.”

Well, just a minute. When did it get decided — in a public meeting — that there should be speed bumps anywhere on the cart path system?

How about this suggestion: Before you screw around with the crown jewel of Peachtree City, how about you elected special people involve somebody more than “an advisory committee” with an agenda.

Here’s unsolicited advice: Keep the cart path paved and in good repair. For any other bright ideas, put them on the public meeting agenda and cut off that insulting timer.

[An aside, the first house I bought in Peachtree City in 1978 came with a cart path easement — an entrance to the cart path system for the entire subdivision. I could not then and cannot now be more grateful for such a treasured amenity that my family with four kids enjoyed for years. A busy cart path runs past my back yard today. And when I say “runs,” I write accurately. I don’t want no stinkin’ speed bumps behind my house.]

[Cal Beverly has been editor and publisher of The Citizen since 1993.]