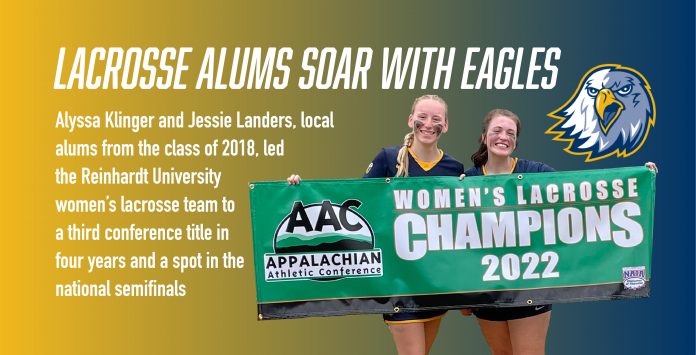 Reinhardt University just completed a banner season for their women’s lacrosse team, and a local pair were a key reason why the Eagles soared in 2022. Fayette County High grad Alyssa Klinger and Whitewater High grad Jessie Landers, both newly-minted Reinhardt graduates and local alums from the class of 2018, pushed the squad to a third conference championship in four years, along with a spot in the national semifinals.

The duo led a landmark season for the Eagles, including an Appalachian Athletic Conference championship that guaranteed them a spot in the NAIA national championship tournament. This year alone, Klinger, an attacker and midfielder, scored 47 goals with 9 assists, and Landers, a goalie, posted a 12-3 record with 89 saves.

In the opening round of nationals, they beat Life 15-14 before falling to Lawrence Tech in the semifinals. The Eagles finished the year 13-3 overall.

The loss caps off a pair of tremendous college careers. Klinger eclipsed 100 career goals this year, and Landers finished her four-year run with a sterling record of 30-8.