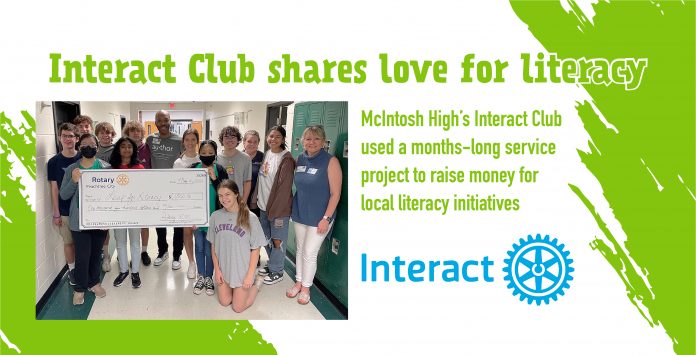 After COVID-19 took a bite out of club membership, the Chiefs slowly rebuilt and had more than 20 members by the end of this year. The small but dedicated bunch banded together on a months-long service project that raised money for local literacy initiatives.

Interact is Rotary International’s service club for youth ages 12-18, and the McIntosh Interact Club is sponsored by the Rotary Club of Peachtree City. Their goals include developing leadership skills and personal integrity, demonstrating helpfulness and respect for others, understanding the value of individual responsibility and hard work, and advancing international understanding and goodwill.

Rotary requires that each Interact Club engage in at least two service projects per year that will benefit the school or the local community. In choosing a service project and local organization to support, the Interactors considered the causes that Rotary International supports. They decided that supporting education and literacy was the way to go when they learned that more than 775 million people over the age of 15 are illiterate and nearly a quarter of Georgia adults are illiterate.

After doing some research, the kids found an awesome literacy organization right here in Fayette County, “Leap for Literacy.” They decided that is who they would fundraise for – but the question was how?

With several lacrosse players in the club, they settled on a fundraiser game they dubbed “MHS Lacrosse for Literacy Showdown: Girls vs Boys sponsored by Interact.” Along with raising funds by charging admission, they also collected book donations and raised awareness about the Interact Club and McIntosh lacrosse.

It took several months of planning, but the day was a great success – especially for a first-time event. They ultimately raised $3,000, which was split between the Interact Club and the two MHS lacrosse teams. Book donations were distributed to local schools and Bloom, which supports children in foster care.

Throughout the year, the club enjoyed speakers on leadership, personal branding, stress management, and more. Stan Tucker, the Founder of Leap for Literacy, came to the last meeting of the year to accept a $1,500 check, and he explained to the students exactly how his organization would use the funds.

“You could see that they were very proud of their efforts and accomplishments,” said Lei Lydle, a club sponsor.

“Through the club, we hope that the students develop leadership skills and an understanding of the importance of serving the community.”