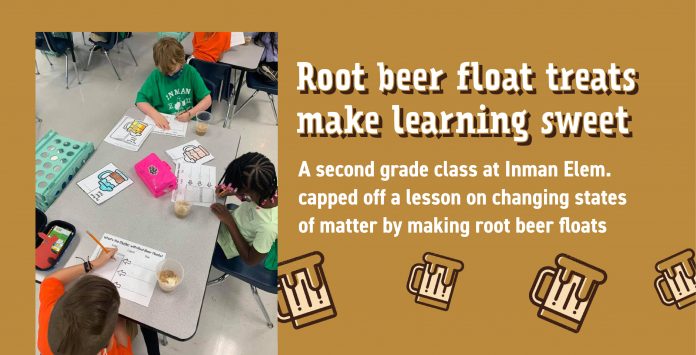 Hard work on a science lesson came with a sweet reward. Emily Burns’s second grade class at Inman Elementary capped off a lesson on changing states of matter by making root beer floats.

While learning about the different states of matter (solid, liquid, gas), the class made floats to watch the ingredients combine to reform into new states.

“Students were very engaged and laughing the whole time. They worked well with others and had a blast working as a team,” said Burns. “They felt like scientists, observing and collecting data. I encouraged them to use their five senses throughout the experiment.”

“Our class had so much fun observing the states of matter! Students really loved watching the change of a solid and liquid to create a gas,” said Burns. “They are ready for our next experiment already.”