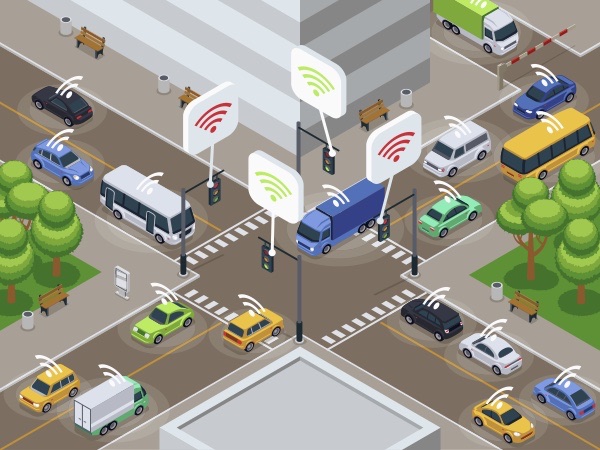 Let’s say sometime in the near future a Peachtree City ambulance pulls out of Neely Station near the intersection of Peachtree Parkway North and Ga. Highway 54. It’s 5:45 and evening traffic is at its peak.

The EMS technician pushes a button on the ambulance dashboard and — eureka! — the traffic signal turns green to allow the ambulance onto Hwy. 54 West. Then every traffic light on Hwy. 54 westward turns green in sequence and in anticipation of the passage of the emergency vehicle, clearing its path to a multi-vehicle crash with injuries at MacDuff Parkway and Hwy. 54.

That’s one scenario.  Other scenarios were talked about by both state and city officials at the City Council meeting Feb. 2, and the jammed-up intersection of Hwy. 54-Hwy. 74 was part of the discussion.

“As an example of how it worked, Davis said a car four cars in front of yours could slam on its brakes and the technology in your vehicle would pick up on that. Vehicles would all be equipped with this technology in a few years,” according to the minutes of that meeting.

The Atlanta Regional Commission wants to outfit more than 1,000 intersections around Atlanta with the technology. Already, 600 intersections in Cobb and Gwinnett counties and the city of Johns Creek are operating with the devices, Davis told the council.

What about cost, the council wanted to know.

“GDOT was the administrative sponsor, which meant they did the paperwork. ARC provided regional oversight. The cost share was 80/20, with 80% being federal aid, and 20% being local match. The average cost to equip an intersection was about $8,300 total, making the match for a local agency about $1,600 per intersection,” the report said.

Here’s how it would work:

“What they would do was install an RSU [roadside unit] at a traffic signal. Vehicles would have the same type of radio, either installed after-market or factory-installed. Automakers were making plans to incorporate them in future model years. … There would be a roadside unit (RSU) radio at each of those intersections to send messages between the infrastructure and suitably equipped vehicles and also receive them from vehicles. For instance, if an airbag was deployed, that message would be sent out, and first responders could be dispatched to the incident.

“Initially, the public safety fleet was an ideal target. When an emergency vehicle was in response mode, it could send a message to a traffic signal asking for a green light. A related function was called transit signal priority. A bus that was running behind schedule, for instance, could send a message asking to get through a signal a little faster. The ATL in Atlanta had used this on one of their busiest routes. The system could also alert vehicles to the presence of pedestrians in crosswalks,” the report said.

If the city agreed, the intersection could go “smart” in 10 months, according to Davis.

The council members had some questions:

Councilman Mike King asked, “What would be the additional cost of purchasing a vehicle with this new equipment?”

Answer from Davis: “This would just be another safety feature. Davis said he didn’t know exactly what the cost would be, but manufacturers of the equipment said it was about $30 for a chip that went into the vehicle’s onboard computer. The after-market version was about $800.”

“City Manager Jon Rorie noted that it was easy to see the benefit of traffic preemption for public safety and the awareness when making right turns for pedestrian safety, but how would this benefit the average person? He said he had a 2019 vehicle, so he would have to upgrade to take advantage of it anyhow. What would it do for him?

“Davis said he saw the vehicle to vehicle side of it as the major advantage.

“Rorie wanted to know if GDOT could communicate with the signals, such as controlling the timing, and Davis said they could, but would not do it without approval from the local governments.

If the city paid its 20% share for every signal on Hwy. 54 within the city, King said, the city’s share would be about $166,000, which would be “a very cheap price to get quicker response for emergency vehicles or some semblance of crash avoidance.”

City Engineer David Borkowski added that it would cost the city $1,000 to mount the device into a city vehicle.

That’s where the cost would be, Rorie responded, not at the intersections.

Fire Chief Joe O’Conor said fire truck manufacturers were starting to incorporate this technology into their vehicles, so as they bought trucks in the future, they wouldn’t have to keep buying radios.

Councilman Kevin Madden said he believed this would be money well-spent if it meant accidents could be avoided.

Councilman Terry Ernst said they were talking about just 26 square miles in Peachtree City. It was a high price. Was the juice worth the squeeze?

Did we want to be penny-wise and pound foolish? Rorie asked.

King said they needed to read up and study on this before they took action.

Rorie said staff would gather more data and take it one step at a time. They could install the traffic signals without getting the radios for the vehicles, he noted.

Council took no official action on the proposal.