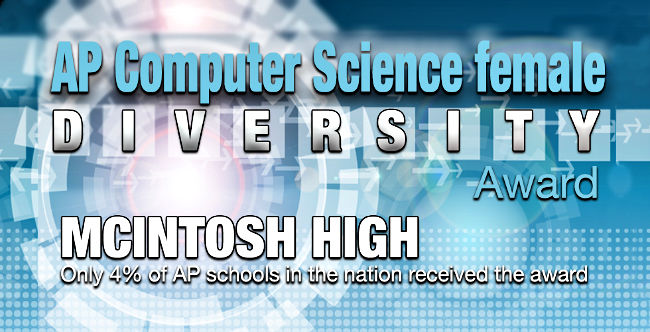 A large percentage of students taking Advanced Placement (AP) computer science courses at McIntosh High are female, and this is why the College Board, a nonprofit organization that oversees the administration of college entrance exams, has awarded the school the AP Computer Science Female Diversity Award.

Out of 20,000 schools that offer AP courses in the nation, only 818 received the award, placing McIntosh among the four percent of schools being recognized for the steps they are taking to reach gender parity in computer science education.

The award is given to schools that had a 50 percent or higher female representation in either AP Computer Science Principles (AP CSP) or AP Computer Science A (AP CSA) in 2019, or whose percentage of female examinees met or exceeded that of the school’s population in 2019.

McIntosh received the award for AP CSA. The school was one of 15 in Georgia to receive the award for this course, and one of 21 overall recipients in the state.