A week ago, Nikki Rajahn was a proud mother reflecting on an incredibly kind-hearted gesture by her young son.

Now she is a businesswoman dealing with an avalanche of positive comments and national media recognition that began with a simple T-shirt.

The viral photo of her son wearing at T-shirt with a message of friendship has resulted in an invitation to appear on a national morning TV show Wednesday.

“I have to brag on my son. I told him that as a back to school gift, I will make him any shirt he would like. It could have anything — a basketball theme, football, etc., which are all his favorites. He thought a while and said, “will you please make me a shirt that says ‘I will be your friend” for all the kids who need a friend to know that I am here for them?” Never underestimate your kid’s heart for others! I love my sweet Blake!”

The Fayetteville resident had started her online venture, Unfading Adornments, as a way to tap into her creative side while allowing her to earn income as a stay-at-home mother of four. She specializes in personalized messages that can be put on just about anything — shirts, hats, tote bags, decals, canvases, party decorations “and so much more,” according to the Facebook page she created for her business.

Her 6-year-old son Blake unwittingly inspired her to create what might end up being one of the best-selling T-shirts in the United States this year — and it started with a simple act of kindness.

Rajahn told her son that, as a back-to-school gift, she would make him a shirt for his first day at North Fayette Elementary School with any kind of design he wanted.

After thinking about it for a while, he announced that he wanted a shirt with this basic message: “I will be your friend.” No fancy design or flashy colors. He told his mother that he wanted to wear it “for all the kids who need a friend to know that I am here for them.”

She created the shirt and uploaded a photo of Blake to her Facebook page. The purpose of the July 29 post was simply to brag on her son.

“Never underestimate your kid’s heart for others,” she wrote underneath the photo of her smiling son wearing his new shirt. “I love my sweet Blake!”

She could never have anticipated what happened next.

As of Monday morning, that post was shared more than 5,200 times on Facebook while receiving 10,000 likes and more than 1,000 comments. Similar results have been seen on her Instagram page as well.

News outlets locally and nationally picked up on it, with a Google search revealing stories posted by CBS News and Fox News, among dozens of others.

Of course, this kind of exposure has led many others to want the same shirt. A large number of respondents have placed their own orders or inquired about how to do it, while many others are simply spreading the word and praising Blake for his message.

Rajahn is selling the shirts for $15 each and has decided to help others through this initiative as Blake’s example has inspired her to do. A portion of the proceeds from each sale will benefit Real Life Center, a Fayette-based charity that offers a wide variety of services to people in need. Sponsored by Dogwood Church, the organization has upscale thrift stores in Fayetteville and Tyrone.

Rajahn is wading through the hundreds of comments she has received and trying to get shirts ready for the people who are ordering them. She put a message Friday on her Facebook page telling readers that she is working on updated pricing and other options to make the process as efficient as possible. She posted again Saturday, saying, “Please be patient with me as my inbox is filling up.”

Among the comments posted Monday morning were a message from a staffer at ABC-TV’s “Good Morning America” asking for an interview. Another commenter tagged talk show host Ellen DeGeneres and wrote, “This is what America needs right now! Friends, not more bullies!”

And what does Blake think about all of this?

Rajahn wrote late last week that after selling a few shirts and telling him why, he replied, “Oh, good! Now more and more people are going to have more and more friends!”

She added that he is very flattered to see so many who “want to be his twin.”

A news release from the Fayette County School System noted how one act of kindness can have a huge ripple effect.

“These five simple words have made a huge impact on not only the North Fayette Elementary community, but nationwide as Rajahn and his mother will appear on Good Morning America on Wednesday to spread his message of kindness, ” the system release says.

“North Fayette’s principal, Dr. Lisa Moore, says, ‘The first day of school tends to be the hardest day for many of our students because they may be new to the school or they may have separation anxiety from their families after being home for the summer so his shirt shows compassion to whoever may be having a difficult time and just needs a friend. Friendship shows a sense of belonging and his shirt breaks the barrier of others feeling like an outsider by saying hey, you belong here and are welcome at North Fayette Elementary, and I am your friend.’”

Below, First-grader Blake Rajahn shows off his T-shirt on the first day of school. 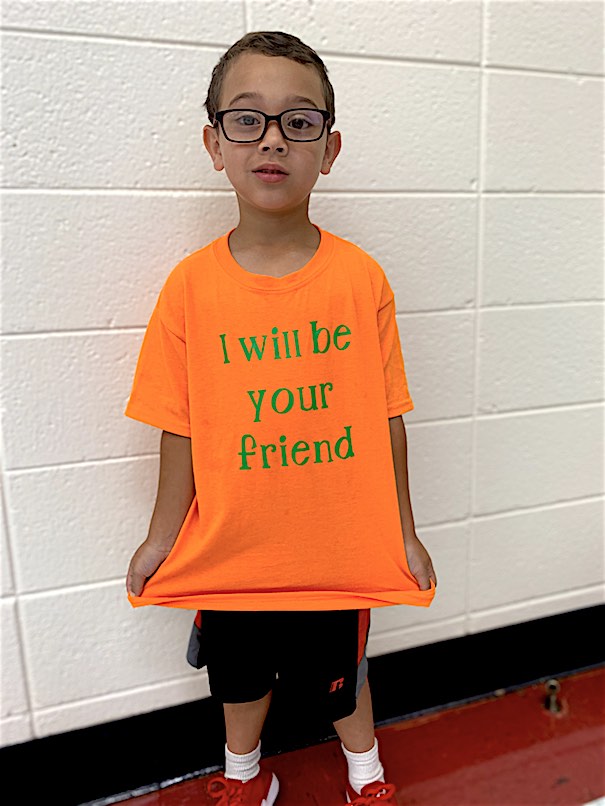