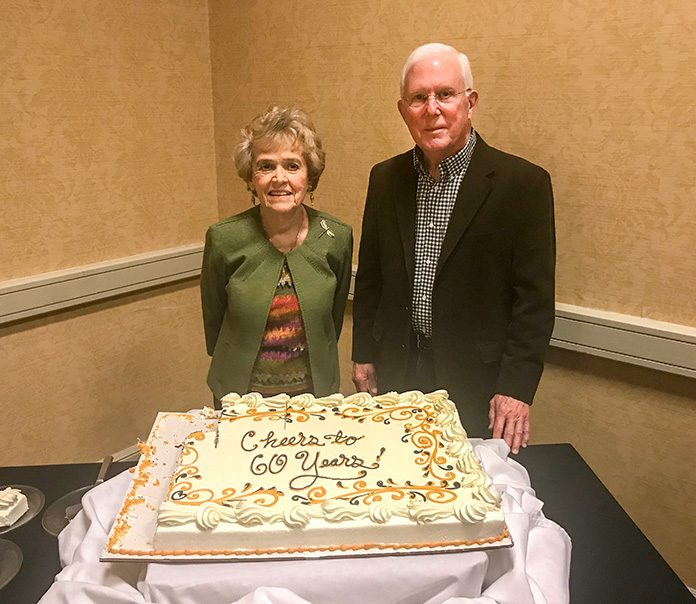 The banquet room at the Peachtree City Hotel and Conference Center was packed with Rotarians and community members set to provide their salute to the city, founded in 1959.

City founder and first mayor, Joel Cowan, in a taped video message said Peachtree City was chartered with no money, and with the charter document borrowing language from the charters of other cities.

The bulk of the occasion came with a presentation by former librarian Rebecca Watts entitled “New Towns Do Get Older.” She shared a number of photos and documents reflecting the life of the city through the years.

Among the tidbits of information were those showing how the area changed over the years. In 1940, 83 percent of the working adults in the area now in the city were farmers, Watts said, adding that the western portion of Fayette County was referred to as “The Wild West.”

By 1960, the census showed the new city with a population of 416 residents.

Watts recalled the pioneering efforts of Cowan and former mayor and businessman Floy Farr and others who worked to bring Peachtree City to life and help it flourish.

One of the many photos showed Fayette County businessman Huey Bray standing in front of Peachtree City’s first house. That home, today, is the residence of Peachtree City Airport Authority Chairman Tom Fulton.

The Rotary event was the first to get in on the 60th anniversary celebration.

“Celebrate Peachtree City’s 60th” will be held March 9 from 2-9 p.m. at Drake Field, which will be filled with a wide variety of activities including a kiddie ferris wheel, train and extreme bungee and other activities for the kids. Live music, food trucks and paddleboats (limited excursions tickets available by calling 678-938-4837) will also be there. After the sun goes down at 7 p.m., ‘The Greatest Showman’(Rated PG) will be shown on an outdoor screen.