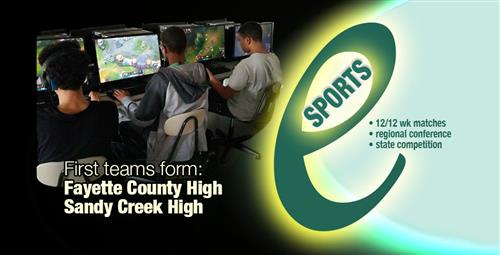 The Fayette County Public School System’s athletic program is stepping out of the traditional sports arena into digital gaming after introducing electronic sports (esports) as a new sports program.

Esports is the competitive playing of video games between one or more individuals or teams. “League of Legends” is a multiplayer online battle arena video game where students will compete throughout the season. Like traditional sports, Esports requires teamwork, communication, strategic thinking, and leadership.

Sandy Creek High and Fayette County High are the first schools in the county to participate in this new program.

“It means a lot to us as coaches that esports is being brought into our school,” said FCHS esports coach Will Cannon. “A majority of the students participating in esports are not involved in any traditional sports, and some aren’t involved in any clubs or organizations.”

Between the two high schools, there were more than 130 students interested in joining esports; however, due to the limited amount of games available, only 26 students combined are currently participating in the new sports program. If the program continues, the county hopes to add more games which will allow schools to add more students. Esports teams are all-inclusive and can be made up of students across different grade levels and genders.

During the esports competition season, teams will play 12 matches over the course of 12 weeks. Each match will culminate to the playoffs against other teams in Georgia based on a regional conference. Later in the season, there will be a semifinal matchup between the North, South, East, and West champions ending the season in a state competition.

Sandy Creek High has approximately six players on one team while Fayette County High has 20 players spread across four teams of five.

With more than 200 colleges and universities offering esports scholarships, establishing esports in Fayette County enables students to do what they love and provides them with additional opportunities to earn scholastic recognition.

“This is a way to embrace my inner nerd and get to know other people that are like me as well,” said ninth-grader Owen Astrel. “I feel that this gives other students the opportunity to show their skills and interests outside of traditional athletics.”