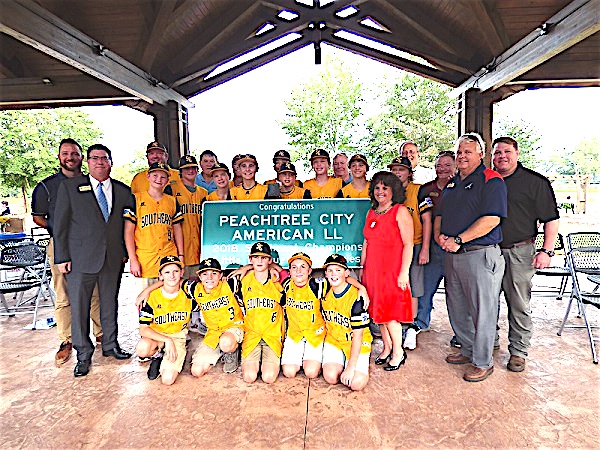 Applause was the order of the evening on Sept. 4 as the 2018 Southeast Champion Peachtree City American Little League team was honored under the new pavilion at Drake Field after their return from the Little League World Series in Williamsport, Pa.

Above, Members of the 2018 Southeast Champion Peachtree City American Little League team were joined by a host of elected and appointed officials and guests at Drake Field on Sept. 4 for a celebration in their honor following the recent team’s participation at the Little League Word Series. Also at the ceremony was the unveiling of a sign to be placed at the city’s entrance along Ga. Highway 54 East. Photo/Ben Nelms.

Team members were introduced, entering the stage area to the applause of the nearly 1,000 people attending the Tuesday evening event.

The team received a proclamation from the Fayette County Board of Education for their talent, skills and successes, and commendations from U.S. Sen. David Perdue, Gov. Nathan Deal and, of course, from Peachtree City Mayor Vanessa Fleisch.

Fleisch during the brief ceremony made two interesting announcements. The first was that the team will be the Grand Marshals at the city’s annual July 4 parade in 2019. The second announcement, which required an unveiling, was a sign that will be placed on Ga. Highway 54 along the east entrance to the city. The sign congratulates the “Peachtree City American Little League, 2018 Southeast Champions at the Little League World Series.”

Also at the ceremony, a representative of the Atlanta Braves announced that the Peachtree City team will receive tickets for the Sept. 14 Braves games, will meet the team during batting practice and be honored in an on-field ceremony.

Rounding out the ceremony were two 12-plane flyovers by the Falcon RV Squadron based at Falcon Field.

Noteworthy at the ceremony was the recognition that the Peachtree City team and the team from Hawaii were joint recipients of the 2018 Jack Losch Little League Baseball World Series Team Sportsmanship Award. Voted by a teams, coaches and a host of others, it was the first time two teams received the award.