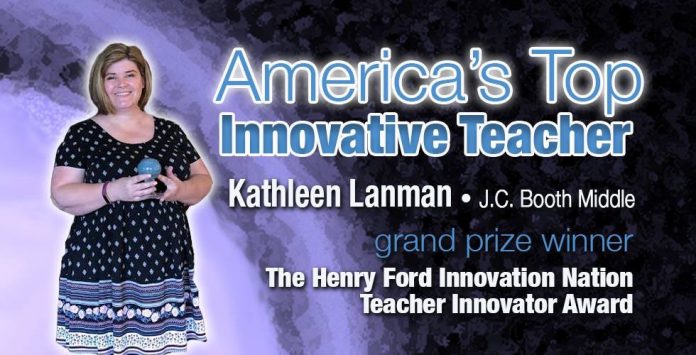 A Fayette County middle school teacher has been recognized as one of America’s top 10 innovative teachers by The Henry Ford Museum of American Innovation. Dr. Kathleen Lanman, a science teacher in the STEM program at J.C. Booth Middle, is a 2018 grand prize winner of The Henry Ford’s Innovation Nation Teacher Innovator Award. Only 10 grand prize recipients were chosen along with another 10 first place winners. Lanman was the only teacher from Georgia to receive an award, which recognizes educators who are using the classroom to inspire innovation, creativity, problem-solving, and critical thinking among their students.

Lanman is building her legacy at Booth Middle as a teacher who helps foster student innovators. For two years in a row students from the school have won Georgia Tech’s InVenture Challenge and have advanced to compete at the National Invention Convention where they have taken top prizes for their inventions.

With experience teaching in both the arts and sciences, she describes herself as a “dedicated advocate for STEM/STEAM education for all students.” In addition to being a science teacher in Booth Middle’s STEM program, she is also its coordinator, and she presents frequently at educator and educational technology conferences about the role teachers should have in fostering innovation and invention in the classroom.

The winners of the award were selected by a panel of judges, including Albert Lawrence, co-host of the CBS Saturday morning television show, “The Henry Ford’s Innovation Nation.” They chose teachers who demonstrated the habits of an innovator, those who inspired their students to challenge the rules and take risks, who demonstrated how to be collaborative and empathetic, and taught the value of learning from failure and staying curious.

As a grand prize winner, Lanman received a weeklong “Innovation Immersion Experience” at The Henry Ford Museum in Dearborn, Michigan that took place July 29-August 2. She took behind the scenes tours with curators and archivists and attended a teaching innovation workshop and special recognition ceremony.