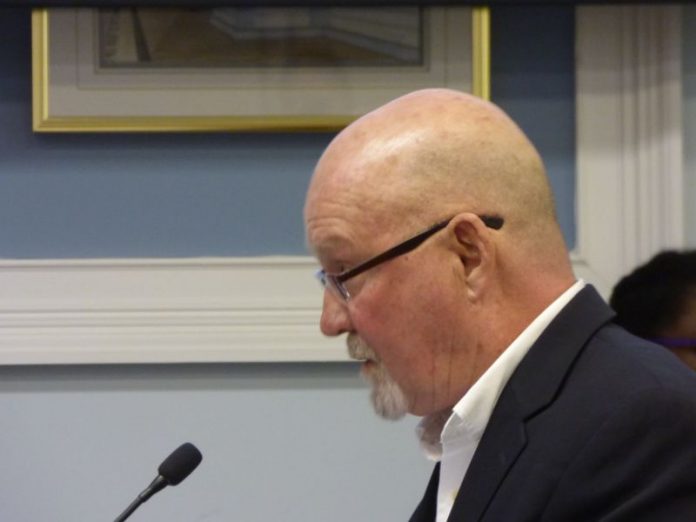 What would likely have been the most contentious of the agenda items at the Feb. 8 meeting of the Fayette County Commission was one dealing with a discussion and potential action related to complaints and investigation of the working environment at the Fayette County 911 Center. Though the item was tabled, the public comments pertaining to it were charged with emotion.

The agenda item pertaining to complaints and issues at the 911 Center, including those relating to Director Bernard Brown and other staff,  was tabled on a 3-1 vote until the Feb. 22 meeting so Chairman Eric Maxwell could be in attendance. Commissioners Charles Rousseau, Randy Ognio and Chuck Oddo voted to table the item. Commissioner Steve Brown was opposed.

Laying out the rationale for the agenda item, Brown in a prepared statement said “I received documentation and testimony from employees at several levels within the 911 Call Center.  Some had spotless employee records and resigned, some were terminated and others were cut off from the department under dubious circumstances. After reviewing the documents given to us by the former employees in December, I was incredibly disheartened and distressed. It was another instance of our County Administrator not keeping us fully informed.

“Several frivolous accusations were made about my asking for a copy of a form within an employee file being illegal. Those charges were clearly not true and the legal opinion from the county attorney dated Jan. 30, 2017, entitled ‘Access to Personnel Records’ made it known that elected officials and the public had access to government personnel files according to the Georgia Open Records Act. The act calls for personal information such as birthday, social security number, medical information, etc. to be redacted. There was no such personal information on the form that I obtained and the complaints from (commissioners) Ognio and Oddo were unfounded and meaningless.”

The tabled item notwithstanding, commissioners heard public comments from some of those wanting to address the issues.

Included in the audience of approximately 200 people were nearly 20 employees of the 911 Center and their family members.

Those public comments, with nearly 20 people speaking, came with people having their say on both sides of the complaints leveled against 911 Director Brown, those dealing with county employee personnel records being posted on social media by Commissioner Steve Brown and accusations of improper words and actions between various current and former 911 employees. Many of those speaking were current or former 911 employees.

Numerous speakers gave high praise to the work of Bernard Brown in the 911 Center, while others painted a grim picture of his management methods.

Some from the audience supported the posting of the personnel file postings, while others felt those actions, while apparently legal, were nonetheless unethical and not based in fact. Many of the comments came from former and current 911 employees.

Other public comments stemmed from Commissioner Brown’s ongoing issues with County Administrator Steve Rapson. Some sided with Brown, while others, such as former Commissioner David Barlow, likened Brown’s actions to a witch hunt against Rapson.

One of those weighing-in was county Director of Building Safety Joe Scarborough, whose issues included Brown’s methods of obtaining personnel files and the accusations against Rapson and others.

The obtaining and public release of personnel files may be legal, but was also inappropriate, he said.

“I have no doubt that if I or another department head acted in that manner we would probably be terminated immediately,” Scarborough said.

Also speaking was Fayette NAACP President Terrence Williamson said his organization had been approached with complaints and subsequently felt the issues had been resolved, believing that “things would change.”

Williamson thanked Brown for exposing the “rot in the system,” adding that the NAACP does not condone releasing personnel records and asking Brown to cease his public vendetta against Rapson.

Another speaker, county employee Sheryl Weinmann, said a culture of harassment exists, but it has nothing to do with administrators or directors.

A number of speakers, both current and former 911 staff, leveled accusations at each other. Some spoke calmly while others were filed with emotion. While the audience heard the back and forth claims and counter-claims, is was clear that, from a personnel investigation perspective, a resolution and even a clarified understanding of the actual occurrences at the 911 center, would not be possible in a public venue.

Speakers at one point were reminded by commissioners to note that accusations being leveled should be referred to as “alleged” unless the speaker had personally witnessed the stated communication.

Former 911 supervisor Janika Terrell alleged a number of inconsistencies at the center dealing with policy enforcement and Director Bernard Brown yelling at staff, and called for an investigation into the center.

Current 911 employee Wendy Coulter said the reported conflict was present prior to Director Brown’s time at the 911 center (since August 2015). Coulter also questioned the social media postings “before we were contacted to get the other side.”

One of the public speakers was former Commissioner David Barlow, who used his time to zero-in on Commissioner Brown’s actions in releasing personnel information on social media and the “witch hunt” he said Brown was conducting against Rapson.

Commenting on the release of personnel information on social media, Barlow said, “Commissioner Brown takes it upon himself to mount an investigation into personnel matters through the Open Records Act and accesses personnel files of county employees, without working with the County Manager and/or the Board of Commissioners as a body. I find that very problematic.

“I think publishing online or copying and giving out personnel records of county employees is just wrong and unethical. Does every county employee now have to worry that their personnel file might be shared publicly?”

Beyond the right of commissioners to access personnel records, Barlow called for guidelines to be established when accessing files.

Barlow’s comments also referenced Brown and his issues with Rapson.

“If Commissioner Brown is so clear about firing (Rapson), as an outcome of his one-man investigation, it begs the question: is there a personal vendetta against the County Manager or is there just cause?” Barlow asked. “And if there is just cause, wouldn’t you want to engage your fellow county commissioners in the concern?”

The agenda item will be taken up at the Feb. 22.