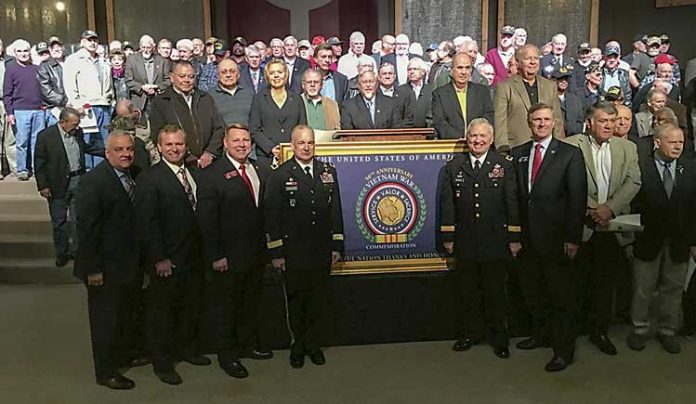 More than 150 Vietnam veterans were honored Jan. 27 at Peachtree City Christian Church. Ga. Department of Veterans Services (GDVS) representative Brian Zeringue said those in attendance received a Certificate of Honor for their service during the Vietnam War. “It is never the wrong time to say thank you to a veteran, and that is especially true for so many Vietnam veterans who were never properly thanked when they returned home,” said GDVS Commissioner Mike Roby. Along with honored vets, those pictured in the front row, from left, included Commissioner Mike Roby, Jeremy Anderson (Overwatch Technology), Rep. Josh Bonner, Brigadier General (Ret.) Rock Donahue, Brigadier General (Ret.) Peter Madsen, State Senator Marty Harbin and Peachtree City Councilman Mike King. Photo/Submitted.