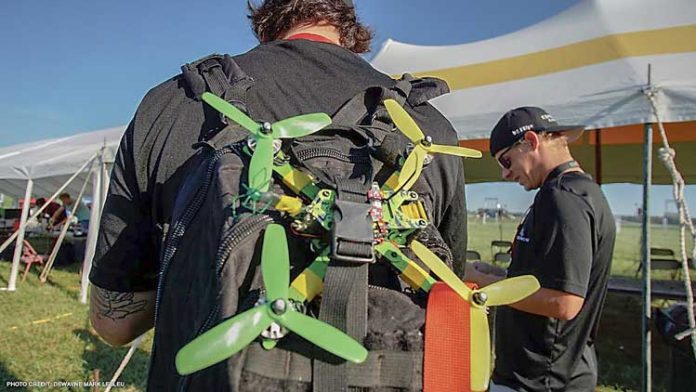 Drones are in the news as well as in the air in Peachtree City. The Peachtree City Council just learned that their one ordinance regulating unmanned drone aircraft may not fly in court.

And the biggest drone-flying competition in the Southeast is landing in Peachtree City Saturday beginning at 11:30 a.m. at Riley Field, 176 Wisdom Rd., next to Peachtree City Elementary School.

Above, racing contestant backpacks his drone to launch site. Photo/Special.

The federal government has preempted all state and local control over drone usage, according to city resident Bob Ross, himself a drone enthusiast who brought a Frisbee-sized craft to show those attending the July 20 council meeting.

“One of the biggest drone racing events in the Southeast will be held in Peachtree City this coming weekend,” according to Gerrie van Zyl of Peachtree City.

“The best pilots from four states will descend on Peachtree City to compete in the Peachtree Cup Region 2A Final. Up to four pilots will qualify for a spot at the National Championship in Reno, Nevada, which will be held with the famous Air Races in September,” van Zyl said.

“There will be a second track that is open to other pilots to practice on and explore drone racing. The finals race will be streamed live on FPVlive,” van Zyl said.

Described last Thursday night by Ross as an “informational briefing,” his presentation provided an overview of drones, their capabilities and uses, and the concerns and risks associated with the diminutive aircraft.

Ross explained the types of drones currently in use, and clarified that they are considered to be aircraft when weighing between a half-pound and 55 pounds, are incapable of carrying a person of any size and are operated remotely or fly-by-computer-programming.

It is not only hobbyists that fly drones, Ross said, noting that various public safety agencies also use the aircraft in their work.

Drones are a hot seller, Ross said, adding that the Federal Aviation Administration expects the sales of commercial and hobbyist drones to reach approximately 7 million by 2020.

In Peachtree City, it is unlawful to use a drone or remote-controlled flying device within any recreation facility during a scheduled practice, scrimmage, game, tournament or event. That’s the rule that might not pass court review, since the feds have forbidden most local oversight of all drone usage.

Yet there are concerns, said Ross, in terms of things such as personal injury, property damage and illegal activity.

For the time being, drones and their activities are regulated by FAA, with the damage, destruction or disabling of the tiny aircraft putting the person responsible in the crosshairs of federal law, but exempt from local regulations. In addition, anyone on the ground shooting at or damaging a flying drone could face federal charges.

The reason, said Ross, is that the FAA has jurisdiction over U.S. airspace. And for the present, federal regulations say that no state or local government may impose an additional registration requirement on the aircraft.

There were 13,554 FAA-registered drones in Georgia in 2016. Some of those will be buzzing above Peachtree City this weekend.

The best racing pilots will be competing in the main event, but there’s also an Open Track area with more relaxed racing and a chance for co-piloting some drones with FPV goggles provided. Event officials say bring sunscreen, even a tent and chairs, to view the drones. Entrance for spectators is free.