A renowned icon of fatal neglect is Nero fiddling while Rome burned. As emperor, he not only sang and played the cithara, a stringed instrument similar to the lyre, he also organized and performed in musical competitions, more horrifying to his subordinate officials than the gruesome murders he ordered.

But I wonder if the ancient “fiddling” saying was not literally about music, but about his devotion to trivia while ignoring vital matters. If so, Nero would be a comfortable fit in the modern American public.

While our country teeters on the brink of financial catastrophe, its institutions crumble and the anti-Trump left with hair on fire promotes incivility, temper tantrums and the violence of anarchy.

The American public is led by conductors in the mainstream media to hyperventilate over Presidential tweets, recordings of crude locker room banter, gender as a choice rather than biology, safety on college campuses from any ideas a student might find uncomfortable, eradication of masculinity from the military, subdividing ourselves into competing groups of victimhood, instilling in our kids a hair trigger to be offended, ignoring the history and self-control lessons from the U.S. Constitution in our public school system … I could go on but I’m getting depressed. 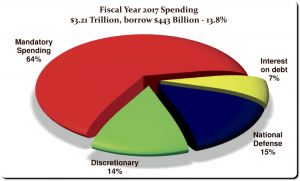 Even after Democrats lost the election and Republicans shift policy to the right as promised, nanny-state “feelings” persist to overcome adult thinking on tough choices. Two current issues illustrate the point.

First, the air is leaking badly from the balloon of enthusiasm over impending repeal of Obamacare. I met a man last week whose health insurance premiums went from $500 a month to $2,000 a month under Obamacare, and his deductible went from $1,000 a year to $12,000 a year, rendering his insurance coverage moot. He and I both are disappointed that Republicans are stopping short of driving a stake through the heart of Obamacare.

Arguments within the Republican camp, sounding uncomfortably like those on the left, rage for and against cutting back Obama’s Medicaid expansion, and the proposed plan uses tax credits to prop up Obamacare’s redistribution of wealth in subsidies that robbed from Peter to pay for Paul’s health insurance.

Meanwhile, the very ones ostensibly leading the charge to kill Obamacare — Trump, Ryan, et al — curry favor with the media and voters by promising “nobody is going to lose anything,” leaving many of us scratching our head and wondering what the real point of repeal might be?

In other words, the leftist goal of state-sponsored health insurance for everyone has been accomplished. It is now an entitlement and, accordingly, destined to live forever even though Republicans bicker about what name or shape or color or flavor that “birthright” health insurance will bear.

Second, Trump’s budget proposal clearly divides us into the right cheering for at least some of the deep cuts long prayed for, and shrieks of outrage on the left. Carefully noting reactions to proposed budget cuts is instructive on how U.S. fiscal policy has become a house of cards.

Reporter questions with thinly veiled scorn challenge budget cuts on their favored federally-funded program, waving in our face their passionate advocacy instead of the objective journalism they owe us. Media bias decides on the public’s daily diet of news that leans to the good feelings of dessert, not the discipline of vegetables.

And so budget cut arguments are chock full of emotion, and nonsense. With hundreds of channels in countless categories available to any TV viewer or radio listener, true believers are nevertheless committed to federal funding of selected programming – who could be against Big Bird? – and wave off any objection to an inappropriate political tilt, like that of NPR.

Defenders of the National Endowment for the Arts seem unable to comprehend the issue is not who loves or hates art. Even conservatives know that art sometimes disturbs or challenges the norm, and are not saying we must prohibit displays like Andres Serrano’s “Piss Christ” in which a crucifix was shown submerged in a jar of the artist’s urine. We are not saying Chris Ofili cannot exhibit his painting “The Holy Virgin of Mary” decorated with elephant dung.

The principal lost in frantic complaint is that, while art is sometimes provocative and unpopular, we don’t have to subsidize objectionable projects with our tax dollars. That of course presumes there are actually tax dollars available to pay the artist to fund his crappy project, and that program administrators will use good judgment on how to spend your tax dollars, both repeatedly failed notions.

Every budget cut proposed brings howls of outrage with injured parties captured on TV with a closeup of tears. The reassurance or disappointment, depending on your point of view, is that Trump’s budget cuts don’t have a ghost of a chance of surviving in Congress since re-election is their first priority.

As your congressman or senator will explain to you, special interest are two words paired into a pejorative term, but that each of you is a special interest when you advocate for your favorite federal-funded program. And they need your vote. So the budget cuts will be softened, quite a bit I think, and they don’t amount to enough to solve anything anyway.

I liken this mess to a long-matured epidemic of mental illness, with ordinarily smart people emotionally unable to grip the simple concept that, just because something is a good idea, that doesn’t mean the federal government should do it, and if the fed should do it, that they shouldn’t unless there is money in the kitty to pay for it.

Not having the money, though, has been no deterrent to spending. Congress just borrows more every year while building the pile of government giveaways ever higher. This year we are borrowing $443 billion, pushing our national debt up to $20.1 trillion with nary a thought to debt reduction.

While Trump’s proposed budget cuts are a welcome reversal of direction, we are still just tinkering at the margin, making little real difference, not even pretending to reduce the deficit, without a whisper on curtailing the leviathan of entitlements.

Let me show you what reporters and citizens should be screaming about.

The pie chart shows that mandatory spending makes up 64 percent of 2017 spending. That includes Social Security, Medicare, healthcare, unemployment, and other spending we cannot touch under current law. Actually, I should include in mandatory the interest on the national debt, but I wanted to show that 7 percent separately because it increases with every annual deficit, and it will increase more as interest rates rise.

Defense spending is low at 15 percent after Obama squeezed it down, and it will increase under Trump. So increasing debt interest and increased defense spending can come only from one place, the various programs that make the 14 percent remainder of discretionary spending, which includes veterans, agriculture, energy, commerce, education, environment, foreign aid, etc.

The amount of spending we can control is small and shrinking. Mandatory spending on entitlements is the gorilla’s share and growing, and yet nobody in Washington, including our brazen new president, is willing to touch entitlements.

Furthermore, mention of mere reduction in the rate of growth in entitlements lights a firestorm of protest that makes every politician’s knees knock. To do any real good, cuts to entitlements would have to be so deep that blood on the floor would be knee deep, and it will never happen.

While the public laps up their daily serving of trivial distraction on TV news, while reporters with no remaining journalistic instinct either miss or ignore the real story, like Nero we are fiddling in the face of a clear and present existential threat, a bomb of fatal proportions with a lit fuse burning shorter every day.

The left has already won with their nurturing nanny-state programs that will kill the country before they end. Fatal entitlements live forever because Republicans have weak spines; their virtue is only that Democrats are so much worse.

[Terry Garlock lives in Peachtree City, Ga. He occasionally contributes a column to The Citizen.]