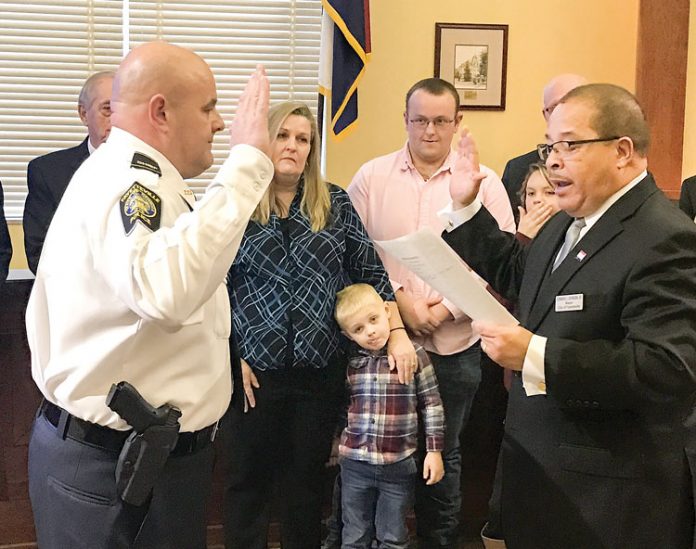 Between meeting with officers and community leaders, Gray said he’s trying to get the department to be one of the top in the state.

“It’s taken a lot of man hours in the beginning, but it’s all going to be worth it,” he said.

Gray grew up in Riverdale, and said he knew law enforcement would be his career since high school.

Gray’s 27-year career in law enforcement spans everything from being a patrol officer at colleges to working at several police departments.

His last job before moving to Fayetteville was as a north precinct commander in Henry County, where he supervised 70 employees. Fayetteville’s police department is a similar size, and Gray is a firm believer in making sure the community is involved with the department.

“My style of leadership is in community policing and problem solving,” he said.

Gray believes in leading by example, and being visible in the community, so he can head off possible issues before they become problems.

He’s impressed with the city’s diversity and believes that’s a strength that can be harnessed to create an even safer community.

“I really want to build a partnership and take a proactive approach to policing,” he said.

Gray is also a big believer in education and is currently working on his dissertation for a doctorate of education and organizational leadership. He already has a bachelor’s degree and two masters degrees.

Gray’s education background was a key part in deciding to take the position of chief.

“I analyzed it using some research skills I’ve learned and decided it was the best fit for me and my family,” he said.

Currently Gray is working on restructuring the department, which was one of the recommendations made by a state consultant nearly a year ago. In March, 2016, the City Council heard a report from consultant Frank Rotando, who is the executive director of the Georgia Association of Police Chiefs. Recommendations from Rotando included restructuring the police department into two divisions, Patrol and Investigations/Support and eliminating the position of major and have a captain manage each of the two divisions.

Interim Police Chief Jeff McMullan is now deputy chief, and Gray is thankful for the support McMullan has provided the last few weeks.

As for the future, Gray sees nothing but blue skies ahead. “I plan for us to be the safest city in Georgia.”-