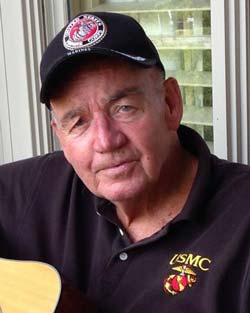 Jim was born July 26, 1940 in South Bend, Ind. to Jim and Ruth Lowe, who preceded him in death. He graduated from Notre Dame University in 1962 and immediately enlisted into the United States Marine Corp. He saw active duty in both Panama and Vietnam where Captain Lowe was awarded the Bronze Star Medal for his heroic achievement.

After the military, Jim worked as a combustion engineer first in Detroit, then moving with his wife and 3 children to the Chicago area where his children were raised. Later, a job transfer took Jim and his wife Sandy to Peachtree City, Ga. where they lived for 20 years before moving to Sun City Peachtree in Griffin, Ga. Jim was a published author recounting his Marine service and time in Vietnam through A Jar Head’s Journey and Last Letters.

Jim will be cremated and laid to rest at Georgia National Cemetery. His family will schedule a military funeral honors ceremony at a later date.

In lieu of flowers, memorials may be made to the Wounded Warrior Project (PO Box 758517 Topeka, Kan. 66675 or www.woundedwarriorproject.org who Jim supported through all profits from his book sales.

Please join the family in honoring the life of Jim Lowe II by visiting www.conner-westburyfuneralhome.com and posting your tributes and memories.

Conner-Westbury Funeral Home, 1891 W. McIntosh Rd., Griffin is in charge of the arrangements.