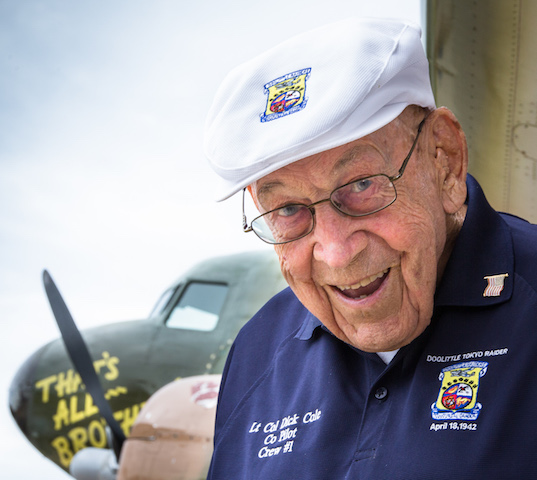 Atlanta Warbird Weekend (AWW) will present its largest lineup of  World War II veterans and aircraft for its third annual event at Dekalb-Peachtree Airport (KPDK) in Chamblee Sept.24-25. Attendees will see eight Curtiss P-40 Warhawks among a total of 40 WWII warbirds on the grounds.

More than 20 WWII veterans will participate, including Lt. Dick Cole (pictured above), the last remaining crew member of the famous Doolittle Raid over Tokyo. Warbirds will fly during the day, with a special P-40 formation flight at 4 p.m., and rides will be available on vintage Commemorative Air Force (CAF) WWII aircraft throughout the weekend, beginning at 9 a.m. each day.

The CAF Dixie Wing, the Georgia chapter of the world’s largest WWII flying collection, coordinates this community event. This year’s program also will celebrate the 75th anniversary of the American Volunteer Group (AVG), nicknamed the Flying Tigers, hosting the largest gathering of P-40 Warhawks in 50 years. Notable veterans who will participate include AVG Flying Tigers crew members Frank Losonsky and Charles “Chuck” Baiden, both officers of the AVG Flying Tigers Association. A special guest, Lt. Gen. Fan, Ta-Wei, Chief of Staff of the Republic of China Air Force, will attend with four other officers.

Children will be able to ride the USAF Rapid Strike flight simulator, experience how to operate bomber turrets (electronically operated), see the inside of aircraft cockpits and play in the PDK park playground. The weekend event features 15 educational displays and two Beechcraft T-6 Texan II trainers on display from the U.S. Navy and U.S. Air Force.

The Curtiss P-40 was highly associated with the Flying Tigers and was the third-most-produced fighter plane of WWII.  Very few are still flying and this will be a rare opportunity to see these aircraft together and hear from actual veterans who served with the Flying Tigers, as well as hear from other WWII veterans who will discuss their experiences.

The Flying Tigers were recruited under secret presidential authority and commanded by Claire Lee Chennault. The shark-mouth nose art of the Flying Tigers remains among the most recognizable images of any individual combat aircraft or combat unit of World War II. The AVG Flying Tigers Association is celebrating its reunion in conjunction with the AWW. Presentations at AWW, and leading up to the event, will be organized to educate and connect the public with the historical significance of the American Volunteer Group.

Also expected for AWW are WWII veteran pilots Bob Jones, who flew C-47 and the C-46 Commando over the “Hump” in the Himalayan Mountains; Paul Crawford, who Flew 29 missions in P-51s and flew P-40s for Chennault in the 14th Air Force; plus Albert McMahan, a B-17 ball and tail gunner who flew 25 missions in the early days of the 8th Air Force when there were no friendly escorts, and Henry Hughey, who flew as a ball turret gunner with the 487th Bomber Group (Gentlemen from Hell) later in the war and completed 32 missions.

“Community support has been amazing and it is really bringing history alive in honor of our veterans,” said Jay Bess, CAF Dixie Wing leader and AWW co-chairman. “Aviation and veterans’ groups, museums, local municipalities and individuals are volunteering to help us share the story of World War II aviation history. This terrific weekend would not be possible without the support of   Pat Epps and Epps Aviation, Atlantic Aviation, Discover Dekalb and Mario Evans, Dekalb-Peachtree Airport director.”

AWW will be open from 9 a.m. to 4 p.m. each day Sept. 24-25 at the Dekalb-Peachtree Airport. Great food will be available with food trucks, the 8th Air Force Historical Society barbecue and the Downwind restaurant, which will be open both days. This year’s “Dinner with the Tigers” and all photo workshops are sold out. For a complete schedule of activities and CAF aircraft flight prices and reservations, visit www.atlantawarbirdweekend.com.The mission of the Texas-based CAF is to honor veterans and American military aviation through flight, education and remembrance.