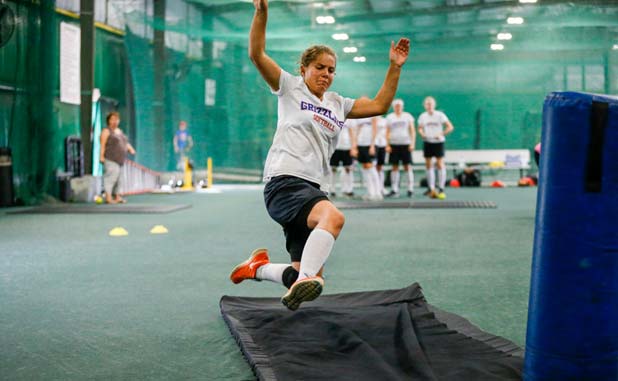 To many of us with old-school values, the world seems to have lost its mind. But if you turn away from the folly chasing your attention on TV and social media, there are comforts if you know where to look. Even in this world gone mad, there are reassurances of the innate goodness of people, examples of fellowship that transcend language and borders and politics, like selfless labor to help young people develop strengths they will need in a challenging world.

One of those examples of service to our fellow man is the extraordinary effort to bring a German girls softball team, the Freising Grizzlies, to train and play an exhibition tournament here in Fayette County.

Part of the reassurance is how our neighbors are opening their arms of welcome. The German girls team will be here Aug. 14 to 21, and will be joined by other teams to play tournament games all day on Saturday, Aug. 20, 9 a.m. until the last evening game is done, at Meade Field in the south end of Peachtree City off Rockaway Road. The girls, both German and American, hope you come to watch.

The German teenage girls climb a steep slope to indulge their passion for softball. The sport is little known in Germany. Equipment is hard to find, coaches are few, training is rare, funding is sparse and they must endure the cost of travel since competitor teams are few and scattered in Europe. Wherever they play, they must set up a field, erect an outfield fence then take it down after play.

In their circumstance it would help to be affluent, but generally they are not. This trans-Atlantic trip to the U.S. raises the stakes on what it costs these girls to love the sport, and they have worked to raise money in a culture and economic climate not very friendly to solicitations.

You might wonder who would have sufficient enthusiasm to conceive of this project and work tirelessly to overcome a mountain range of obstacles? The answer is a slightly crazy guy named Mike Pullias with a very able partner, his wife Beth.

When they moved their family from Peachtree City to South Carolina in 2011, Mike left large footprints in the local sport of girls softball, where he coached his own girls from the tender age of 6.

His influence in the Peachtree City recreational league transformed it to focus on development of players, as it should in recreation, getting rid of coaches who kept weak players on the bench in order to win. Mike’s influence remains in the recreation league today, and now he is bringing a German girls team to Peachtree City just before he and Beth move their family back to our town.

They are working with Mike Latham, president of the recreation softball league, and with the city and Mayor Vanessa Fleisch to make our European guests especially welcome.

Mike and Beth have persuaded locals to open their homes as hosts to these German girls, and their wallets to buy meals for them in local restaurants. Local training facilities are donating training time, batting cages, etc.

These visitors from Germany will be practicing with the Emory University softball team, and participating in training events within Peachtree City and in other areas of metro Atlanta. The people, organizations and businesses willing to donate their time, money and service to make this happen warms the heart.

Since the German team needs coaching help, and since Mike Pullias is a dedicated softball coach, he will be their second coach during their visit. His energy and skill will be an important contribution. I have memories of Mike coaching three girls’ teams in the same season, and to keep things moving during tournaments he would jog from one field to another since walking was too slow. Did I tell you he’s a little bit crazy?

If you are like me before my daughter Melanie became involved in softball, you might wonder what the fuss is about. In their younger years players learn the basics of throwing, catching, batting and the rules of the game, as well as principles that serve them well in life, like respect for authority and believing in themselves after trying and failing over and over until they finally get it right. Learning how to do something that was just too hard at first teaches perseverance, puts a spring in their step, some earned cockiness in their heart, confidence they will find useful in school and in life.

And then at some point they become a softball warrior. They have learned their position and with constant practice and escalating effort they seek to raise their skill to the next higher level. Before a game they watch players on the opposing team during warmups, looking for strengths, and for weaknesses to exploit.

Players plot strategy with their coach and their teammates to defeat the other team, all in fun and by the rules, with victory even sweeter if successful plays involve deception. They learn the warm glow of pride when they realize teammates depend on them even when the competition is tough, even when they have to reach down deeper, stretch harder, react quicker than they ever have before to make the next play.

When they step into the batter’s box to face a pitcher faster than they have ever seen, while their cleats scratch the dirt like a pawing bull, with intense focus they quietly tell themselves, “I can do this, just separate earlier and swing faster!”

While the field team chatters to intimidate the batter, the dugout chants their encouragement that peaks with each pitch then subsides until the next windup. Whether a bunt or hit or dropped third strike, the batter-turned-runner grunts her effort to outrun a throw to get on base as the dust flies, the crowd roars, and fielders lunge for the ball, trying to make the catch, grab and hurl a rocket to the chest level of first in one smooth quick motion. Done well, it would be like sweaty poetry in motion were it not for the thundering noise.

Players watch each other intensely, sniffing for the first hint of a steal, the runner launching with teeth gritted to outrun the throw, sliding in a cloud of dust, eager for the sweet taste of a base she was not supposed to have.

When the ball is hit well and runners make unpleasant sounds trying to round third base faster, the catcher blocks home plate in desperation and the collisions are not always pretty. But they are exciting and almost always the players get up, whack the dust off themselves while one hunts for her catcher’s mask and the other limps to the dugout.

When the field team takes the dugout, three in the batting lineup get suited up to bat while other players catch their breath, aches and pains disregarded as sweat-stained faces focus on the field, dirty arms and the occasional bloody skinned elbow ignored as they scream their joy and slap an attaboy at a scoring teammate.

These are the same feminine creatures who will primp for an hour to get their hair and makeup just right to be a knockout in a slinky dress.

While their game blood is up, though, best to stay out of their way as they have a job to do and will run right over you to do it. Better still to give them some distance so in their team mode they can wallow privately in the same indulgences as boys: yell encouragement to each other, talk trash, scratch and belch and, after the games when they are tired, dirty and hungry, eat with the delicacy of feral hogs if nobody is watching.

Not knowing whether they will win or lose, for every game they suit up to battle for each other, for their coach and for themselves. But after the dust settles and the showers wash away the dirt and sweat, they put away their warrior to re-cloak as teenage girls. They walk the halls of their school as young ladies proud of accomplishment from hard work well done, and some of them are alluring heartbreakers who drive young men wild.

At Meade Field, on the south end of Peachtree City off Rockaway Road, the tournament is on Saturday Aug. 20, from 9 a.m. until the last game of the evening. Each player will be there to win and they will delight in the battle.

What’s different this time is some of the chatter, chants and coaching will be in an unfamiliar language from girls our city and generous locals have welcomed from Germany. The struggle will be the same as, no matter what language they use to speak or grunt, teenage girls transform for a little while into warriors, suit up and watch each other with steely eyes looking for the weak spots as they stretch to warm up to the fight.

They want you to come watch. Admission is free.

[Terry Garlock lives in Peachtree City and writes columns occasionally for The Citizen.]