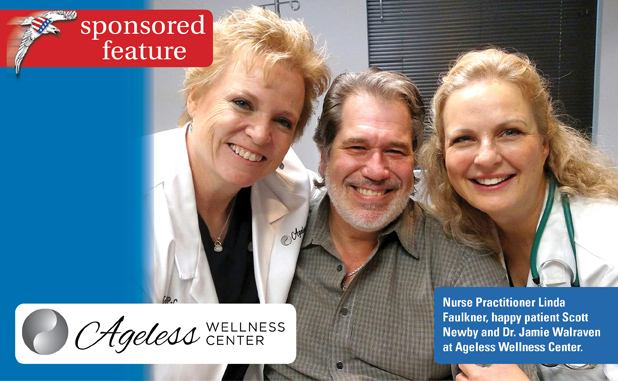 Dr. Jamie Walraven, Medical Director of Ageless Wellness Center and Stem Cell Center of Georgia in Peachtree City, addressed the Cell Surgical Network (CSN) Affiliate Conference in Beverly Hills, Calif., on June 4. Dr. Walraven is the only female chosen to address the gathering, an international association of physicians who’ve joined together to do clinical applications of stem cell procedures.

Mr. Newby’s vascular surgeon informed him that there was nothing else to offer except amputation. “That’s how he met us,” Dr. Walraven said.

“We performed a stem cell treatment which involved a mini lipoaspiration,” Dr. Walraven explains. “We harvested fat and extrapolated the stem cells and other growth factors found in the body, a ‘stem cell soup’ of sorts called SVF (Stromal Vascular Fraction). We redeployed the SVF, some intravenously and some injected directly into the lower leg and foot.”

Within four weeks, Mr. Newby had significantly reduced swelling and his toes were pink. Nine months later, those improvements have not reversed, and his pain is significantly decreased.

“We’ve done other things to decrease his inflammation, his toxicity and to open up blood flow to the skin’s surfaces,” Dr. Walraven says. ‘We found out that he has a high heavy metal toxicity, so we will start chelation therapy with him soon, to remove those.

“He’s already undergoing other therapies to decrease total body inflammation and decrease pain, including IV nutrition therapy, far infrared sauna treatments. We have him on nutritional supplements. Stem cell therapies always work better when they are combined with adjunctive treatments aimed at helping the body treat itself.”

“In functional medicine, we try to get to the root of the problem and treat the whole body,” she explains.

For example, stress can be a contributor to many diseases, so Dr. Walraven and her associates do saliva tests to check cortisol levels, a naturally occurring steroid hormone that’s released in response to stress from the adrenal gland.

“A vast majority of people I check have adrenal fatigue, which is indicative of daily prolonged active stress,” Dr. Walraven explains. “That can cause a lot of symptoms. It increases inflammation and decreases immunity. Stress can be mental, emotional or physical. And having pain every day is stressful. When you’re stressed out, you turn off your cancer fighting genes and increase your likelihood of heart disease, hypertension, stroke or diabetes as well as many other diseases.”

Ageless Wellness Center’s approach to functional medicine goes beyond stem cell and stress treatment. Because there are often multiple causes of disease, there are multiple ways to heal disease.

“So we don’t just do stem cell treatment,” Dr. Walraven says. “We look to decrease inflammation, stress, and toxic burden to the body, and improve the body’s immune system and nutritional status.”

SVF therapy at Ageless Wellness has been used to treat multiple sclerosis, lichen sclerosis (a disease process in the perineum genital area), osteoarthritis, COPD, interstitial cystitis, stroke, rheumatoid arthritis, and Parkinson’s Disease. “We have an ophthalmologist who is going to treat three people with macular degeneration with intraocular injections,” Dr. Walraven says.

Ageless Wellness Center is the only member of the Cell Surgical Network in Georgia and Alabama. “We’re one of about 50 clinics in the world,” Dr. Walraven says. “As members of the Cell Surgical Network we are part of their Investigational Research Board. We operate under the same IRB protocols and all patients are in a worldwide database to enhance our research. What we do is basically patient funded trials.”

The majority of patients show some improvement, though the results are patient dependent and depend on their disease process.

“Everybody has had some improvement in some area,” says Linda Faulkner, Family Nurse Practitioner.

One woman, Faulkner said, had done everything in her power for self-wellness. After her stem cell treatment, she reported several months without a flare in her interstitial cystitus when before it was horrible every day.

Dr. Walraven added, “If she’d come to us without doing all of the things she had done already, we would have helped her with suggesting some lifestyle changes to optimize her wellness. The thinking would be if someone is detoxified, hormonally balanced and nutritionally repleted, they will have a better outcome than somebody who is not. What we’re trying to do is give everyone the best outcome possible

“It’s planting seeds in fertile soil,” Faulkner continued. “When the soil is prepared to its highest and most nutritionally balanced place, you grow this big strong beautiful tree.”

Ageless Wellness Center is the only member of the Cell Surgical Network in Georgia and Alabama and is one of only about 50 clinics in the world.

“We don’t just do stem cell treatment. We look to decrease inflammation, stress, and toxic burden to the body, and improve the body’s immune system and nutritional status.” -Dr. Jamie Walraven

For More Information
Stem Cell Center of Georgia operates within the Ageless Wellness Center at 1000 Commerce Drive, Suite 300 in Peachtree City. For more information or to schedule a consultation with Dr. Jamie Walraven or nurse practitioner Linda Faulkner, call 678-364-8414 or visit their website at agelesswellnessptc.com.