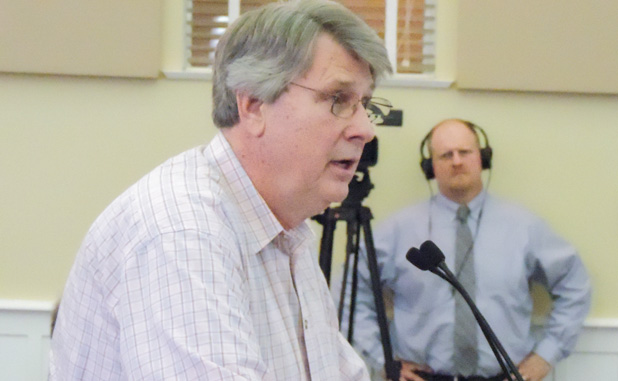 It was virtually all over, before any shouting started.

On a picture-perfect late spring evening, nearly 70 people crowded into Fayetteville City Hall May 19 to let the City Council know their feelings on the controversial development known as Abbingdon Square that sits on the edge of downtown Fayetteville.

Residents reacted with outrage and concerns over the proposal by Rea Ventures Group to establish a three-story building called Abbingdon Square featuring 60 apartments along with limited retail on the first floor facing North Glynn Street. The property is situated on 4.6 acres downtown, between Lafayette Avenue to the south, the 100-block of North Glynn Street to the east and a short distance from Lanier Avenue to the north.

He emphasized the plan was not a government initiative, nor was it a plan developed by the Atlanta Regional Commission. Instead, he said the development would aid in growing the city’s downtown and would only add 25 peak-time traffic trips in the morning rush hour.

“I don’t know where you get that traffic study,” said Councilman Harlan Shirley, as he set the mood of the debate.

Mayor Ed Johnson was more succinct in his opinion of the development.

Johnson told Monroe the Planning Commission had already turned the proposal down, and it was not likely to muster the votes in two weeks for approval. He asked if the developer wanted to pull the proposal. Monroe said no, and the residents had their say on the issue.

Business owner and adjacent resident Rich Hoffman said the development could not be rezoned PCD because it was too small and “traffic is already a problem in that area.”

Former City Councilman Al Hovey-King said the land should remain commercial since there is a great potential for further commercial in the downtown area.

With the comments mounting against the development, Johnson again asked the developer if he wanted to withdraw. The developer said no, and the issue will be voted on in June. But as residents exited City Hall into the crisp night air, it seemed the fate of the development was already sealed.