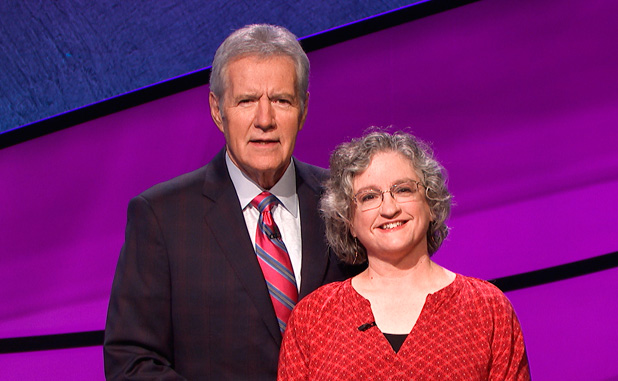 Answer: This Fayette County employee will be seen May 25 by millions of viewers across the United States on one of television’s most popular game shows.

Question: Who is Sarah Trowbridge?

She is already a familiar face to many of all ages in the community since she has spent the past 10 years helping them broaden their knowledge at the Fayette County Public Library in Fayetteville, where her title is public services librarian. Now she has the chance to show off her own considerable knowledge.

It has been a long process to get to this point. Trowbridge took the online test for the first time in 2013 and earned an audition in Huntsville, Ala. She wasn’t called to appear on the show during the 18 months following the audition, so she was able to take another shot.

This time she passed the online test and auditioned in downtown Atlanta last spring along with probably 200 other people in groups of about 20. She had to take a short written test to prove that she had actually passed the previous one and not some computer robot.

Then it came down to a screen test. The would-be contestants played a mock game which was videotaped. But even after that, Trowbridge wasn’t sure it wouldn’t be more of the same.

“All you are told the end of that day is you are in the pool of potential contestants for 18 months,” she said.

Finally the call she was waiting for came in February. She had less than three weeks notice to make plans for a trip to Los Angeles (at her own expense) and a shot at stardom. The taping would be in mid-March.

“Fortunately my boss was extremely supportive,” she said with a laugh.

On her first trip to California in 30 years, Trowbridge and her husband spent the entire week out west with a few friends. But it was all business for one day. She was picked up at 8 a.m. at her hotel by a smartly dressed driver in a nice van, riding in with other contestants from their various hotels.

Typically the show tapes five episodes — an entire week’s worth — in a single day. As she was scheduled for a Wednesday broadcast, Trowbridge participated in the third taping of the day and was able to watch the first two from the studio audience. She was not sequestered or kept away from her on-air opponents, whom she met first thing in the morning and with whom she spent the entire day.

During breaks in the game, host Alex Trebek answered questions from the audience and interacted with the contestants. “It was nice,” said Trowbridge. “He seems just the same in person as on TV. His stage persona is just like his screen persona.”

Of course, she cannot reveal ahead of time how she performed or whether she appeared in more than one episode. Everyone else will have to learn her fate at the same time — when they watch the show.

Trowbridge has planned a viewing party at her house with a large crowd. She was lauded last month at a Fayette County Board of Commissioners meeting, and her grown son has been telling all of his friends about Mom’s big accomplishment.