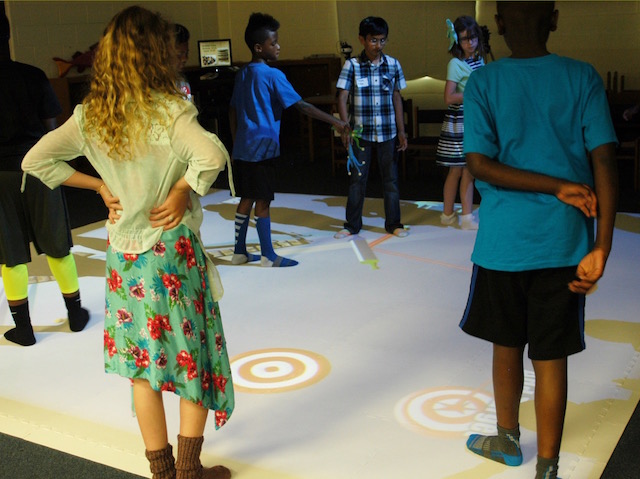 No longer is the media center at Spring Hill Elementary just a quiet space where students sit and read or conduct research. It is an active learning environment that combines technology with whole body physical activity, making learning fun and memorable.

Bookshelves have been put on rollers so books can easily be relocated to other areas of the media center, making room for a large white mat that serves as a screen for projected images. Students take off their shoes and walk on the projection to interactively solve problems using their bodies, and sometimes with a wand that allows them to feel the weight of an object in their hand as they interact in real physical space.

Students work together to find answers to questions as they walk, run, jump and move objects through space. This is “embodied learning,” which is the combination of kinesthetic, collaborative, and multimodal components. The theory behind it is that people learn through their bodies, and by working together.

This technology is called a SMALLab, and Spring Hill Elementary is the first school in the metro Atlanta area to install it, which the school purchased using Title I money.

SMALLab is an acronym for Situated Multimedia Arts Learning Lab, which was created in 2010 by a team of researchers and media experts at Arizona State University. SMALLab encourages learning by blending human interaction with a computer. The program uses motion-capture technology to track students’ movements.

Spring Hill recently showcased the new learning lab to members of the Fayette County Board of Education and school superintendent Dr. Joseph Barrow.

A group of fourth-grade students participated in a variety of learning activities that covered several disciplines such as multiplication of positive and negative numbers, the meaning of idioms, color mixing, and light and mirrors.

]The school’s media specialist, Jeff Eller, says that the new technology is helping students learn concepts faster than they would in a regular classroom setting.

“Just the other day a fourth grade class was using SMALLab to practice multiplication of positive and negative numbers. After a 240 second round, I asked what the result would be if two negative numbers are multiplied together, and they answered it would be positive. In a matter of eight minutes, the students had learned a concept that is foundational to future mathematical processes,” says Eller.

Since the SMALLab was installed April 14, Eller says the lab has had 36 class visits from students in prekindergarten to fifth grade, equaling 38 hours of instruction and exploration.

“We have chosen a tool that will serve our entire school, and after teacher feedback, student use, administration support, and visits from district administrators and board members, we will continue our pursuit to have SMALLab as a permanent tool for the students and teachers at Spring Hill Elementary,” stated Eller.