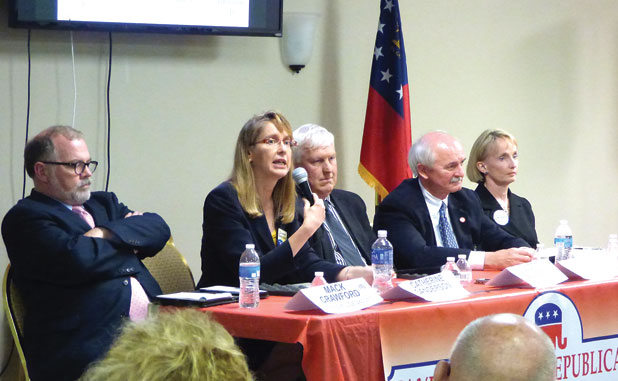 • Crawford: ‘I’m just Mack,’ not given to ‘snap judgments,’ try to be kind and patient

• Sanderson: Family lawyer disturbed by delays of many months for decisions, ‘that’s why I decided to run’

• Ballard: Saw threats as DA, disappointed that convictions result in softer sentences, wants to bring back banishment as sentence

One of the forums for the May 24 nonpartisan general election held on April 21 at the headquarters of the Fayette County Republican Party included candidates for two Griffin Judicial Circuit Superior Court seats and seat on the Fayette County Magistrate Court.

Also in the forum was attorney Christy Dunkelberger who is challenging Magistrate Judge Loyd Black. Dunkelberger was included on the panel, rather than in a separate forum, due to Black’s absence.

There is no primary for these judicial positions, so the ultimate winners will be decided in May.

First up with opening comments was Crawford, who introduced himself, described his outlook as a judge and spoke about the time frame surrounding some of his court decisions.

“I tell people I’m just Mack. I’m from Pike County, I’ve been there all my life,” Crawford said, then relating his background and experience in the judicial system, including his six years with the Griffin Judicial Circuit. “I was thinking what a judge should be and what judicial temperament means. Patience, open-mindedness, courtesy, tact, even-tempered, confident yet not self-centered, understanding, compassionate and humility. Ladies and gentlemen, I try to be very kind and very patient with everybody that comes in front of me. And I try to treat everybody decent and treat everybody as if it was me standing there or one of my children. I am accused of taking too long to do certain things, but I’m not going to make a snap-judgement decision when it’s your life in my hands. The decisions I make, I’ll probably never live to know if they’re the right decisions. And that bothers me because I want to try to make the right decision.”

Sanderson followed with her opening remarks.

“The experience (of living both locally and abroad) gave me a really good look at different cultures and how many different perspectives there are available in the world and in the courtroom,” Sanderson said, noting that she graduated law school in 1998 and began practicing family law and criminal matters shortly after. “In family law, I’m the one who the other family lawyers send the complicated, complex, high-conflict cases. I help those people to find the rational in a dark situation and find the practical and distill down from all the stuff going on to what’s salient and important. The court rules and then those folks have closure.

“What I’ve found in the last several years is that after presenting that case in court it has taken longer for a decision to be issued. I practice in several jurisdictions, and when I go to Coweta County (before Judge Kirby) we leave that day with a decision made. That family knows at that point what is going to happen. That’s not a snap decision, that’s a well-reasoned decision after a day of testimony. There is no point at which that evidence will be fresher than on that day. The jury decides a case after hearing it, not six months later. There are a lot of people in the circuit who have been waiting for a decision, for six, eight, ten months (or more). That’s frankly unacceptable, and that’s hurting our families and that’s why I stepped up to run.”

Ballard followed with his opening remarks, noting that he has served as district attorney for more than 11 years. Ballard said his motivation for service is to “pay it forward” because he owes everything he has to the people in his life who took an interest in him.

“I can’t fix your plumbing, but I’ve learned the courts. And that’s where I feel like I can contribute. You trusted me to be your district attorney nearly 12 years and I greatly appreciate it,” Ballard said. “That’s given me a front row seat all over this circuit, not just in Fayette County, to see when you’re in danger and and what works to stop it. Your danger (Fayette County), our danger, comes mostly from outside with three out of four people in the county jail being from outside the county. There’s a reason for that. You’re literally under attack, most particularly from Clayon and Fulton counties.”

Ballard said a few years ago he learned that Clayton had 63 active gangs with 47 of those in the schools.

“We’ve worked very hard in the district attorney’s office to try to keep that from seeping down here. But the danger is there. I’m running for judge because it’s very frustrating to watch your law enforcement officers risk their lives for your safety and watch my staff work so hard to get the conviction and then the (jury) convicts and then your judge isn’t as interested in public safety as you think he should be. A superior court judge should protect the constitution,” Ballard said. “My intention on criminal matters will be once somebody has been convicted, I’m going to have your interest at heart. I’m going to be thinking about the public safety. And there’s another old-fashioned remedy that we’ve had on the books for years that I want to dust off and use much more regularly. It’s called banishment (including as a condition of probation).”

Hankinson followed with his opening comments, citing his background in law enforcement and in law practice then later as a superior court judge for the past 14 years.

Hankinson said he tells jurors that when in the courtroom people want to look at the jury box and see 12 people who look like them.

“I hope that when you go to the polls that you’ll think about what kind of judge you want to serve as your judge,” said Hankinson. “I have the experience. I’ve had all kinds of trials in the last (nearly) 14 years that I’ve been here.”

Dunkelberger, in the absence of Judge Black and in what was supposed to be a separate forum, gave her opening remarks. She was also asked by moderators to provide an explanation of the magistrate court.

“There’s a lot of power in this room. I’m not talking about the sheriff or these judges or the district attorney. I’m talking about all the voters here. You hold the power because you are going to elected the people who are going to be in office,” Dunkelberger said in her first comments.

A Georgia resident of 22 years and a Fayette resident for 18 years, Dunkelberger said she practices general civil law and spends time in magistrate court.

“The magistrate court provides what I think is an invaluable service to the residents. It’s also known as the ‘People’s Court’ or small claims court, and handles claims of less than $15,000,” she said, explaining that it is a court where individuals can go and represent themselves in a less formal and complicated venue and without an attorney.

“My forte is the civil area though,” said Dunkelberger, adding that there are four magistrate posts.

One of questions asked about the most significant challenges in the judicial circuit.

Crawford responded, saying one of the most difficult challenges is holding court in four counties. He said court is in session 17-18 days per month.

Sanderson in her response said the biggest challenge is the number of cases.

“We have right now five and a half judges full of cases. So how do you address that?” Sanderson asked. “We need efficient judges. We need judges who are able to listen to facts, distill it down to what’s important and make a decision so the case log can get pushed out.”

Sanderson said the line of cases awaiting a decision is getting longer.

“And those folks who are waiting are coming back to court because they are still wondering what’s going to happen in their cases. So the biggest challenge is how to more efficiently address the caseload that we have, get those cases moving through in an efficient and fair way so that we can move forward and continue to administer justice across the board,” said Sanderson. “With my family law experience I’m able to make those quick decisions and move those families forward.”

Up next, Ballard said the biggest challenge is the need for judges to remember that there is more to their job “than just sitting there and hearing the cases. Y’all are counting on them to protect (you), you’re counting on them to keep you safe. You can do your job by hearing cases, but then if you just stop and all you think about is the defendant who is crying in front of you and how you can help this person … then you’re not thinking about what we need you to be thinking about. We are under seige. We have to have very diligent judges who will think about the protection of the people and recognized what our law enforcement officers are trying to do for us.”

Ballard said he learned from good judges and bad judges. Ballard said there are things that can be done to move things more efficiently and not have to complain about not having a law clerk and having so many cases.

“We can take care of a lot of that ourselves just by doing proven things that have worked in the past,” said Ballard.

Hankinson followed, citing examples of the results of some of those he has sentenced.

“I understand tough sentencing,” Hankinson said, citing another ruling that included banishment which he said is a good tool.

“We need another judge or two and we could use some law clerks,” said Hankinson. “That would help speed things along.”

The candidates, along with closing comments, answered questions pertaining to the power of juries and their thoughts on mandatory minimum sentencing.

“My assessment of the biggest challenge would be the workload, as well,” said Dunkelberger, noting that she researched the crime reports in local newspapers. “I was shocked to see the amount of arrests and the amount of crime. Everyone of those instances where law enforcement is making arrests has to come before the magistrate court to get warrants. That’s a lot of work and I think that would be one of the biggest challenges.”