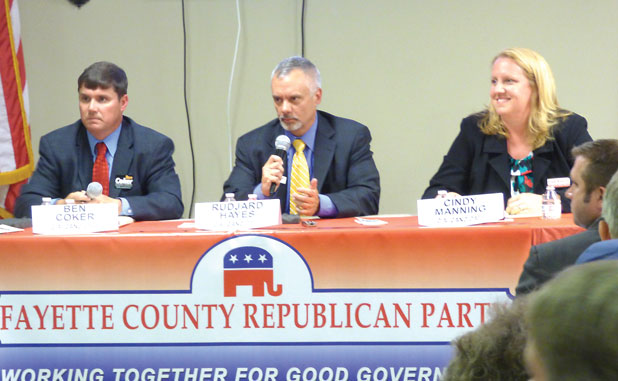 • Coker: ‘In the trenches’ and tried cases in all 4 counties of the circuit

• Hayes: Wrote the manual for prosecutors, prosecuted in two circuits and ran the offices in both

The district attorney’s position is being vacated because current DA Scott Ballard is running for a seat as superior court judge.

Coker was up first, beginning his remarks providing his background and saying he has been with the district attorney’s office for more than 10 years. Coker said he has tried cases in Upson, Pike, Spalding and Fayette counties. Coker has been responsible for the Pike and Upson offices for the past three years which accounts for approximately 30 percent of cases in the circuit.

“I’m one of the only prosecutors in the district attorney’s office to try cases in all four counties in the circuit,” said Coker, citing his experience in a variety of cases.

Explaining why he is running for office, Coker said, “I have passion for my job, I have passion as a prosecutor. I sleep well at night knowing that I’ve helped the community and made the community safer. Fayette County and the Griffin circuit is under attack. I’m the candidate that’s in the trenches on the front lines of the war and I’ll continue to be in the trenches on the front line of the war in court.”

Hayes was next with his opening comments, providing aspects of his personal and professional background.

Pertaining to leadership, Hayes said during his nine years in the Coweta circuit he was responsible for running the busiest offices and, later, the busy Spalding office in the Griffin circuit.

“A district attorney has got to be somebody who can manage people and manage a budget,” said Hayes, then turning his comments to his private law practice. “(In private practice) we deal with employment law (where it is all about) building relations and building bridges. That’s what I built throughout my career with law enforcement, that’s what I’ll continue to do in the district attorney’s office. I’ll continue to build bridges with law enforcement, with judges and with the community.”

Manning in her opening comments laid out the reason for her run for district attorney.

“I have a tremendous passion for the justice system. I believe in it,” said Manning, citing her work in the Griffin circuit as a new lawyer where she tried cases in Fayette and handled appeals for the entire circuit. “Through that process, I had the privilege to argue, not only before the Georgia Court of Appeals, but also the Georgia Supreme Court representing our circuit.”

Throughout her experience, Manning said she handled a variety of types of cases before opening her own practice four years ago as a defense attorney.

“I have a tremendous passion for humility and professionalism,” she said. “But I will tell you I’m the best-educated and the hardest-working person on this stage.”

Moderators during the forum also asked individual questions of the candidates.

Hayes was asked what is different since he ran for district attorney in 2008.

“The best thing that ever happened to me, personally, was losing that election. I lost to Scott (Ballard) in 2008 and had to re-invent myself. I was probably not mature enough at that time because I had only prosecuted,” Hayes said. “Now, being a private business owner and having done other things I understand there’s more to bring to the table than simply prosecuting. I’ve done that, I have the experience and leadership and I have a different set of lenses that I’m able to evaluate situations through. It’s easy to sit as a prosecutor and say everybody’s got to go to prison. But that’s not reality. You’ve got to put people in prison who need to be there. You’ve got to use your whole life experience and your maturity to fashion remedies for situations that don’t need prison time.”

Coker in an individual question said based on his social media page that it is his passion to prosecute. Coker was asked if he someday aspired to be a judge.

Manning in her individual question was asked about a 2010 news article from Spalding County where a sheriff’s investigator reported that she and several others were participating in a poker game at a residence. Two men reportedly arrived at the residence and, at gunpoint, removed thousands of dollars in cash from the host and the belongings from Manning and two other victims. The moderator said the men were apprehended and charged with kidnapping, armed robbery, assault, burglary and aggravated assault. Manning was asked, given her prior service as an assistant district attorney, how she reconciles her participation in the poker game with the high standards expected of a district attorney.

“Thank you for the question. Frankly, I expected this question,” Manning said. “I was the victim of a violent crime in 2010. I was at a friend’s house in Griffin who had a poker game. It was a gentleman I had known for a long time. There were about six or seven of us in the room. Someone was unhappy with the circumstances of the game, came in and pointed a gun at the host, walked him in with the gun behind his head, pointed the gun at each one of us and put us on the ground and robbed us. So how I reconcile that, frankly, I find that a strength. I know what it’s like to be a victim of violent crime. I testified against two men who pointed guns at me. I had to look them in the eye and say they pointed a gun at me.”

Manning said she likes to play poker and finds it an interesting game.

“I won’t be playing poker as a DA. But I’m a victim of violent crime and I know what’s it like to sit with a the jury and testify against someone that’s pointed a gun at me. I think that gives me a unique perspective on this job and it gives me empathy for folks who have gone through that. I play poker. I will never play poker illegally in Georgia. I go to Las Vegas now,” said Manning, followed by applause from some in the audience.

Manning said that if she had been charged and convicted of playing poker (with money involved) it would have been a misdemeanor.

“So is speeding, and I do that regularly, I confess,” said Manning. “I’m not saying it’s something I’m proud of. But (poker) is a misdemeanor that I knowingly participated in at the time. I will not be committing crime as the district attorney. I think this is a minimal issue. Being a victim of violent crime is the bigger issue,” said Manning.

One of the questions posed to all candidates asked if citizens can bring a case directly to the grand jury if they believe their rights have been violated or must it be brought to the district attorney.

Manning in her response said there is a way to obtain a private warrant from a magistrate judge if probable cause is found. After that, it is the responsibility of the district attorney to prosecute.

Some counties allow citizens to present before a grand jury, adding her belief that such an availability should be extended to all.

Coker in response said there is a mechanism for citizens to bring cases before the grand jury. The district attorney’s office does not favor that approach since individuals do not often have the legal training needed to present a case. Best practices show the best avenue is to go through the magistrate court and let cases flow to the grand jury.

Candidates were asked what they have done, or plan to do, to prevent youth crime.

Manning said preventing youth crime is crucial and critical. Manning said she works with Avdo Kids Casa helping children in need in the state division of family and children services (DFCS) and where they can obtain the services of a stable representative to care and advocate for them.

“Involving our schools is also important,” Manning said, citing the work of State Court Judge Jason Thompson who speaks regularly in schools. “Letting our youth see our representatives, both the judicial side and the district attorney’s side, is tremendously helpful.”

Manning said jail tours are also helpful, adding that she would make all the above happen.

Coker said Scott Ballard has laid a great foundation with his involvement with the school system.

Coker said his office has also been involved in holding mock trials for children in schools.

Hayes responded to the question, saying the need is for education and outreach.

“We have to partner with law enforcement to be in the schools, (including in) middle school and elementary school,” said Hayes, citing his involvement with bringing young people into the the courtroom and courthouse and educating them on the specifics of the judicial system and speaking with them on issues such as drugs and teen pregnancy. “You’ve also got to partner with business entities. We’re at a time in the country and community where there’s got to be some money invested in these programs. And it doesn’t come solely from government.”

Coker on another question was asked about the rate of incarceration of non-violent offenders in Fayette County and what factors are weighed during sentencing for those crimes.

Coker said the rate of non-violent offenders and the incarceration rate depends several factors such as criminal history. He said prosecutors look at the seriousness of the crime and prior arrests to base a recommendation. Violent offenders are treated from a more harsh perspective, said Coker.

Hayes responding to the question also cited several factors to be considered. Each case, along with criminal history, must be evaluated on an individual basis. The charge may be the same but the facts are always different. The district attorney must look at history and family life in a full-scale evaluation before offering a remedy that makes sense, Hayes said, citing examples of that approach.

“Sometimes justice entails thinking outside the box and finding ways to help each individual. And then you have to weigh those risks against the community at-large,” Hayes said.

Manning in her response said each case is unique, including for a defense attorney. Non-violent offenders encompasses a broad category of people, Manning emphasized, noting the relevance of drug court and sentencing options.

“We’re filling our prisons with (drug) users, forcing the parole board to let people out quickly,” said Manning. “Whether I negotiate a five- year or 10-year sentence they’re going to get out in a year and a half. So we need to find a better solution.”