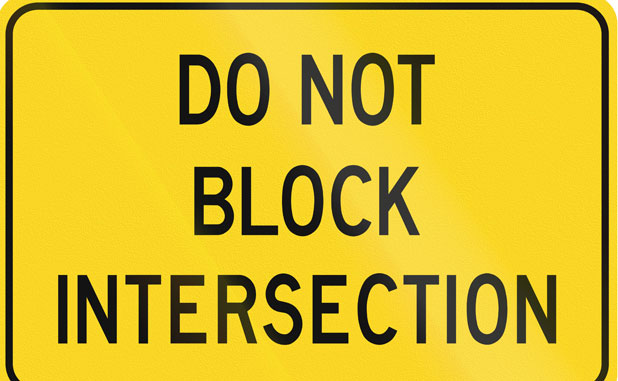 Go to any major city, stop at an intersection, and you’re liable to see a sign, “Don’t Block the Box.”

Last Thursday, the Fayetteville City Council passed an ordinance that it hopes will help clear many of the city’s intersections of encroaching traffic. Police Chief Scott Pitts explained the purpose of the ordinance was to designate intersections with a “Do Not Block Intersection” sign that could be enforced by his department. There is a state law that addresses obstructing an intersection; however, it only covers certain roadways that intersect with state highways.

A ticket for violating the new rule will cost you $100 in Fayetteville City Court, officials said.

The ordinance stipulates that it is unlawful for any vehicle to stop, stand or park at any time within any intersection which has been designated and marked with a “Do Not Block Intersection” sign or similarly worded sign, except in compliance with the orders of a police officer or other authorized officer. No driver of a vehicle shall enter such a marked intersection if traffic conditions will not permit his or her vehicle to pass through the intersection completely, so as not to block vehicular traffic entering into the intersection from any other direction.

The ordinance gives the City Council the power to designate intersections in the city for the erection and enforcement of “DO NOT BLOCK INTERSECTION” signs, or other similarly worded signs sufficient to meet the purposes.

The City Council also passed an ordinance to make it easier for businesses in the Main Street District to advertise their services.

The ordinance will now allow window signs on a regular basis. The signs will be perforated vinyl on the outside window of the business. The old definition for window sign means any type of sign located entirely within the interior of a building or structure, and placed near a window or door, the letters, numbers, pictorial or sculptured matter of which is visible from the exterior of the premises. The wording of this definition requires that,for the applicant to have the standardized, perforated vinyl window graphic installed correctly, it must be treated as a wall sign and not a window sign. The ordinance changes the definition of window sign to allow the vinyl signs in the district.