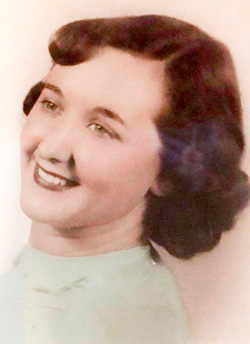 She was a dearly loved wife, mother and grandmother and friend to anyone who knew her. She was preceded in death by her parents, John Henry and Nell White and late husband, Odell Monk of Clendenin, W.Va. Those who are left to cherish her memory are, her husband, Joseph Bradley of Peachtree City, her first husband Kenneth Duckett of Spring Hill, Fla., her children, Phyllis Georgeff of Hazelwood, Mo., Stanley Duckett of Campobello, S.C., Steve Duckett of Fayetteville, Ga., ten grandchildren, six great grandchildren and siblings, Betty Maddox of Spartanburg, S.C., Gladys Lee of Greer, S.C., Olive Jolly of Boiling Springs, S.C., John Henry White, Jr. of Spartanburg, S.C., and Franklin White of Union, S.C., and lifelong friend, Irene Moss of Jonesville, S.C.

Peggy was born and raised in Jonesville, S.C. She graduated from nursing school and worked at Charleston Area Medical Center in Charleston, W.Va. She did volunteer work at the Cultural Center in Pt. Charlotte, Fla. where she was the chairman of the formal ball five years in a row.

A memorial service will be held at New Hope Methodist Church, 154 New Hope Rd., Jonesville, S.C. 29353 on Saturday, February 20th, at 1 p.m. The service will be officiated by Dr. James Ivey.