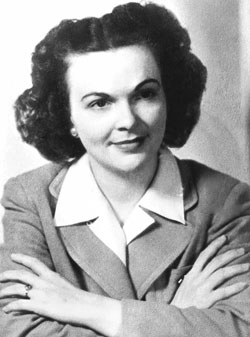 Florence Margaret “Marge” Fedoruk, 94 of Peachtree City, Ga., passed away peacefully on Thursday, December 31, 2015 to be united again with her loving husband of 70 years, Theodore J. (Ted) Fedoruk, who preceded her in death.

The eldest of six children, she was born in Detroit, Mich. on December 13, 1921, to the late Robert E. Ruth and Rena V. Ruth (Steiger). A long-time resident of Grosse Pointe, Mich., she was the consummate homemaker who also enjoyed working in fine retail at Jacobson’s and Kay Baum Women’s Fashions. Marge turned her gifted, interpersonal skills into a successful career as a paraprofessional at Grosse Pointe South High School. Her work with young people fulfilled her desire to bring people together in community and love.

After she and Ted retired to Georgia, in the early 1990’s, she continued to be active well into her late 80’s. She volunteered tirelessly at the Society of St. Vincent de Paul Thrift Store in her community of Duluth, Ga. while enjoying social occasions and making new friends. Marge never knew a stranger.

After relocating to Peachtree City, she remained active and enjoyed her many hobbies.  She was a talented artist, crafter and seamstress. Most of all, she adored taking care of the people she loved, especially family. Always clever, colorful and witty, Marge’s sense of humor was legendary. Even in declining health, she’d find ways to bring levity to the lives she touched.

The family will hold a memorial service at a later date in Marge’s beloved home state of Michigan. For those wishing to express their sympathy through a memorial contribution, the family has designated Christian City Friendship Place, 7300 Lester Road, Union City, Ga. 30291.