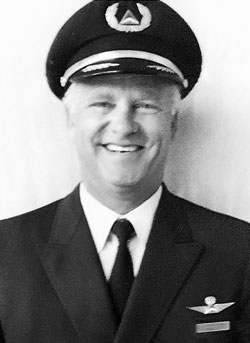 David was born in 1940 in Coral Gables, Fla. He was the youngest son of Harold Devereaux Fowler and Lois Kirkland Fowler, both of Coral Gables.

He is predeceased by his parents and his brother Harold (Buddy) Fowler Jr., and also his son Michael David Fowler.  David graduated from Coral Gables High School in 1959 and proudly joined the U.S. Marine Corp reserves. He attended Miami-Dade Jr. College, and then began pilot training with Aviation Education Corp in Miami.  He was a contract actor and model with small but unforgettable parts in the Flipper T.V. show, a diving scene in the James Bond Goldfinger movie and a speaking line in the PT109 movie – “Aye Aye, Sir” was David’s contribution.

He was also an enthusiastic bartender at night, which paid for flight school. In 1967 David was hired by  Northeast Airlines, which started his commercial aviation career. In 1972 he became a Delta Air Lines pilot with their merger. David flew for Delta and retired as an L-1011 Captain in 2000 after 33 years of service. David is survived by his loving wife Andrea Renee Fowler,  his daughter Lisa (Tom) Konz and his two precious granddaughters,  Sarah and Mackenzie Konz,  stepson Jason (Kristy) Bell, and his constant companion Koty.