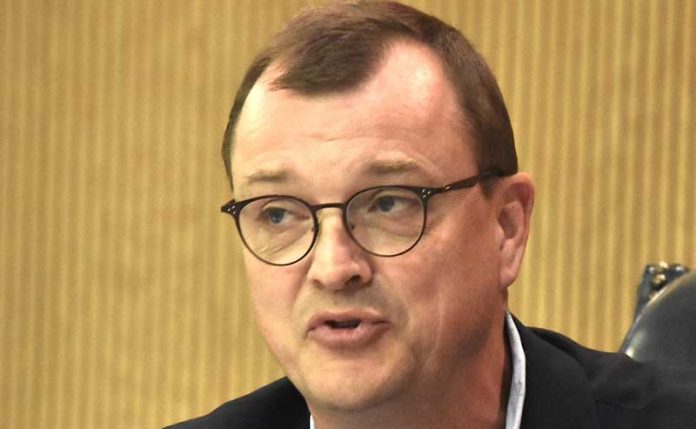 The Fayette County Board of Commissioners conducted several public hearings at its Dec. 10 regular meeting to address zoning issues and requests.

One was a proposed ordinance amendment to eliminate buffers between specified conditional uses in a residential or A-R zoning district.

Zoning administrator Dennis Dutton requested in October that the change be made concerning the elimination of buffers adjacent to places of worship, colleges and universities, hospitals, private schools, child care facilities, cemeteries, recreation centers, and similar institutions registered with the Secretary of State and in A-R or residential zoning districts. The draft ordinance was sent back to the Planning Commission where it received unanimous approval.

One citizen comment in favor of the amendment was made at the commission meeting from the headmaster of Konos Academy, which is in the process of acquiring property from Christ Church at Whitewater where it has been renting space for some time. No one spoke in opposition.

Commissioner Steve Brown moved to approve the amendment, saying that it makes sense for certain uses to collaborate and use space together. Commissioner Randy Ognio said his only concern is if a property reverts to residential, which may never happen but could. Brown said such a rezoning would go back before the board anyway, and anyone buying property like that would simply be doing so without a buffer. County Attorney Dennis Davenport pointed out that such a case would not be a rezoning because the properties in question are already zoned residential but with conditional uses.

The motion passed 3-2 with Ognio and Chairman Charles Oddo opposed.

In other business, a request was made to rezone 8.87 acres on Bankstown Road from R-20 to A-R for development of a single-family residential lot with two recommended conditions: that a variance for the existing dwelling’s encroachment into the side yard setback be obtained within 180 days, and that the minor revision to the survey combine the two lots to meet the five-acre minimum for A-R zoning.

Jeff Anderson, the applicant, told the board that he moved from Canton to have a shorter commute to his job in Fairburn. He found a foreclosed house in Brooks, and since April he and his family have worked tirelessly to renovate it completely. He has two lots that he wants made into a single lot.

No one spoke in opposition. The board approved the request 5-0 as well as a separate agenda item regarding the revised plat.

Staff recommended the transfer of an existing 2015 Retail Alcohol, Beer and Wine License from Amy McKnight to Timothy Evans, doing business as Metro Sports Bar, 1950 Hwy. 85 North in Fayetteville. All county code requirements were met and the applicant was approved by the Code Enforcement Department. The board voted unanimously to approve the transfer.

The consent agenda at the Dec. 10 meeting included amendments to county policy development and revisions; Oddo’s recommendation to allow the county library’s closing Dec. 26; adoption of the board’s 2016 meeting schedule; approval of a letter to the Georgia Environmental Protection Division certifying the county’s strategy for meeting statewide waste reduction goals; acceptance of a $68,000 grant from the Criminal Justice Coordinating Council for the Solicitor’s Office; the addition of Waterlace Pod D, also known as Canoe Club, to the county’s street light program; an $80,000 bid award for the installation of floating docks at Lake Horton and Lake McIntosh; a $73,500 bid award for roof replacement at the Crosstown Water Treatment Plant; $50,000 in funding to continue the Metropolitan North Georgia Planning District Toilet Rebate Program; and approval of the Water Committee’s 2016 meeting schedule.

The consent agenda was approved unanimously.